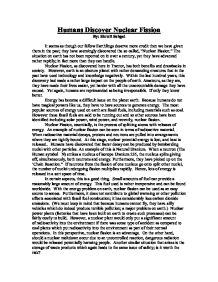 Humans Discover Nuclear Fission By: Shruti Sehgal It seems as though our fellow Earthlings deserve more credit then we have given them in the past; they have seemingly discovered the so called, "Nuclear Fission." The situation on earth has not been reported on in over a century, yet they have advanced rather rapidly; in fact more than they can handle. Nuclear Fission, as discovered here in Trantor, has both benefits and drawbacks in society. However, earth is an obscure planet with rather demanding creatures that in the past have used technology and knowledge negatively. Within the last hundred years, this discovery had made a rather large impact on the people of earth. Amateurs, as they are, they have made their lives easier, yet harder with all the unaccountable damage they have caused. Yet again, humans are reprimanded as being irresponsible. If only they knew better. Energy has become a difficult issue on the planet earth. Because humans do not have magical powers like us, they have to have sources to generate energy. The most popular sources of energy used on earth are fossil fuels, including materials such as coal. ...read more.

This fuel used is rather inexpensive and can be found worldwide. With the energy problem on earth, nuclear fission can be used as an easy source to access. Furthermore, it does not contribute to global warming or other pollution effects associated with fossil fuel combustion; it has considerably less carbon dioxide emissions. (We must keep in mind that because humans cannot fly, they have silly vehicles which do indeed produce terrible pollution; a major problem on earth.) Nuclear power plants (factories that have been built on earth to create such processes) can be fairly costly to build. However, a nuclear plant would only put a significant amount of radioactivity into the environment if there was some type of accident as compared to coal plants which put radioactivity into the environment as part of their normal operations. In this perspective, nuclear fission is an advantage. On the other hand, should a nuclear meltdown occur due to an uncontrolled reaction, dangerous radiation would be released potentially harming people. Another similar situation that arises is the storage of waste products which again leads to the same issue of safety; is it worth the risk? ...read more.

On one side, it can provide a great source of easy energy without carbon dioxide emissions. It helps the people use energy, and does not account for global warming or the greenhouse effect. On the other side, its plants can be potentially dangerous and its byproducts can be used to create the most harmful of all weapons. Uncountable deaths have occurred and unfortunate tragedies were suffered as a consequence of nuclear fission's negative applications. Even the safety issue arises; should plants be built for this process if deadly accidents can possibly occur? Should humans use this process to their advantage even if they cannot be responsible about it? What, really, should nuclear fission be used for? Political will and public pressure have diverted human effort to develop peaceful applications of nuclear energy. As a result, nuclear power reactors have been supplying energy for humans for several decades now. Reactor accidents have changed public opinion to an extent, and the future of nuclear energy is uncertain. Yet the energy demand is on increase, and the public opinion may just change again. Whatever the result of this discovery may be, let us hope that humans will be more responsible and conscious in the future. ...read more.