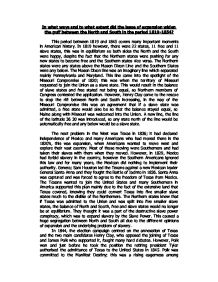 In what ways and to what extent did the issue of expansion widen the gulf between the North and South in the period 1819-1854?

In what ways and to what extent did the issue of expansion widen the gulf between the North and South in the period 1819-1854? This period between 1819 and 1845 covers many important moments in American history. In 1819 however, there were 22 states, 11 free and 11 slave states, this was in equilibrium so both sides the North and the South were happy, despite the fact that the Northern states were pushing for any new states to become free and the Southern states vice versa. The Northern states were any states above the Mason Dixon Line and the Southern States were any below. The Mason Dixon line was an imaginary line which separated mainly Pennsylvania and Maryland. This line came into the spotlight of the Missouri Compromise of 1820; this was when the territory of Missouri requested to join the Union as a slave state. This would result in the balance of slave states and free stated not being equal, so Northern members of Congress contested the application. However, Henry Clay came to the rescue to stop the rift between North and South increasing, in the way of the Missouri Compromise this was an agreement that if a slave state was admitted, a free state would also be so that the balance stayed equal, so Maine along with Missouri was welcomed into the Union. A new line, the line of the latitude 36 30 was introduced, so any state north of the line would be automatically free and any below would be a slave state. ...read more.

The north did not agree with this war and did not agree with the existing gain, however the South wanted Polk to ask for more from Mexico, but so as not to alienate the North Polk changed his mind and didn't. The treaty of Guadeloupe Hidalgo was opposed by some of Polk's own party, which was a sign that Polk was prejudiced on the side of the South. One opponent David Wilmot, proposed an agreement which suggested that all territory gained from the war should stay free from slavery, saying it would be used to protect jobs for white men and so there would be less competition for the jobs. This was put to congress and was almost passed with all Northern congress men voting for the idea and all Southern against. This led to the idea of the south seceding from the union completely. The debate over this idea shows how the slavery was amplifying the political gulf between the North and the South, as secession was suggested. In order to bridge the gulf between North and South, the theory of popular sovereignty was suggested by Lewis Cass and Stephen Douglas. They said that the answer to all the problems would be to let the individual territories about to become states choose whether they wanted to be free or slave states. Many thought this was a good idea and the fairest, but one such problem of this was that it inferred that the Missouri Compromise would then be unconstitutional as it shad said that all states North of the latitude line of 36 30 would be free and all below would be slave states. ...read more.

He also believed that the South would not mind if the states would get to chose because if they did choose slavery, then that was an area which has allowed slavery to expand. The North, however were very unhappy as this bill opened the idea of all the new territories possibly becoming slave states. Some Northerners depicted the bill as a betrayal of the whole spirit of America as a land of opportunity and the American dreams of travelling west and making a fortune by labour as the allowance of slaves would mean that white people would have to compete for jobs. On the other hand, the South, were primarily content with the Bill, but after the criticism of the North they became desperate to pass the bill for southern honour, a very important perception in the South. The Bill led to sectional voting and the bill was passed to the shock of the North. The 1854 elections caused the Democratic Party to suffer severely as the Northern Democrats thought their party was representing the interests of the South at their sacrifices. Before the Mexican War in 1846, events had shown that expansion created grave dangers for the United States of America. Expansion could all too easily ignite sectional jealousy and result in confrontations. In 1849-50, some Southerners had even talked of leaving the Union all together. The 1850 compromise had succeeded in resolving the problems of the time, but not the underlying problem of slavery expansion. ...read more.