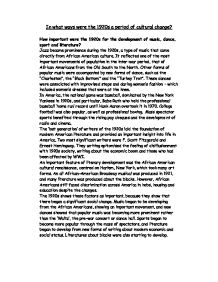 In what ways were the 1920s a period of cultural change? How important were the 1920s for the development of music, dance, sport and literature? Jazz became prominence during the 1920s, a type of music that came directly from African American culture. It reflected one of the most important movements of population in the inter-war period, that of African Americans from the Old South to the North. Other forms of popular music were accompanied by new forms of dance, such as the "Charleston", the "Black Bottom" and the "Turkey Trot". These dances were associated with improvised steps and daring women's fashion - which included women's dresses that were at the knee. In America, the national game was baseball, dominated by the New York Yankees in 1920s, and particular, Babe Ruth who held the professional baseball 'home run' record until Hank Aaron overtook it in 1970. College football was also popular, as well as professional boxing. Mass spectator sports benefited through the rising pay cheques and the development of radio and cinema. The 'lost generation' of writers of the 1920s laid the foundation of modern American literature and provided an important insight into life in America. ...read more.

Thousands of women were able to find employment as telephonists, typists, secretaries and clerks in the rapidly expanding American economy. Clara Bow, the Hollywood film star, known as the "It Girl", was the individual who symbolised these changes. Women's' cosmetics were the most revealing development. Beauty salons appeared across America, and the cosmetics industry increased its earning from $17 million to $200 million per year. It helped to make Chanel, Helena Rubenstein and Elizabeth Arden household names in the USA> Make-up had previously associated with prostitutes, but now women in America were taking control of their sexuality, through the use of cosmetics, shorter skirts and the removal of corsetry. However, the decade saw the rapid growth of women smokers, but saw the rise in birth control to avoid unwanted pregnancies. However the Age of the Flapper only reflected one aspect of the life and role of women in American society in the 1920s. There were courses in "Wife, Motherhood and the Family as an Economic Unit" at the prestigious women's college, Vassar. For many women, this was a decade of unfulfilled expectation. ...read more.

Although films began with silence, this was considered unimportant, as stars such as Charlie Chaplin were able to provide comedy without the use of language. However, in 1927, through the development of technological advances, Hollywood was able to develop 'talking pictures'. This made films even more popular and the establishment of the Academy Awards (Oscars) in 1928 gave Hollywood an annual showcase to prove its importance in American society and world cinema. What do you regard as the most important cultural development in the 1920s? Give reasons for you answers. I think that all the factors were important in the cultural development in the 1920s. Music, dance, sport and cinemas gave entertainment value to all Americans. Women became more independent and were given the chance to work instead of being seen as 'home and child carers'. And radio and cinema advances gave Americans to look at history, and to provide fashion development. However, I think that the change in women was a significant cultural development in the 1920s. At last, women were given some equal rights, and were given the chance to become independent and work for themselves instead of looking and relying on a husband. All these factors were important in some way as they all relate to each other in different ways. ...read more.