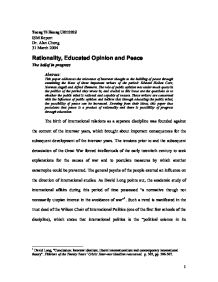 Teong Yi Heong U021202J ISM Report Dr. Alan Chong 31 March 2004 Rationality, Educated Opinion and Peace The belief in progress Abstract: This paper addresses the relevance of interwar thought to the building of peace through examining the ideas of three important writers of the period: Edward Hallett Carr, Norman Angell and Alfred Zimmern. The role of public opinion was under much query in the politics of the period they wrote in, and crucial to this issue are the questions as to whether the public mind is rational and capable of reason. These writers are concerned with the influence of public opinion and believe that through educating the public mind, the possibility of peace can be increased. Drawing from their ideas, this paper thus postulates that peace is a product of rationality and there is possibility of progress through education. The birth of international relations as a separate discipline was founded against the context of the interwar years, which brought about important consequences for the subsequent development of the interwar years. The tensions prior to and the subsequent devastation of the Great War forced intellectuals of the early twentieth century to seek explanations for the causes of war and to postulate measures by which another catastrophe could be prevented. The general psyche of the people exerted an influence on the direction of international studies. As David Long points out, the academic study of international affairs during this period of time possessed "a normative though not necessarily utopian interest in the avoidance of war"1. Such a trend is manifested in the trust deed of the Wilson Chair of International Politics (one of the first few schools of the discipline), which states that international politics is the "political science in its application to international relations with special reference to the best means of promoting peace between nations."2 Woodrow Wilson, being a leading statesman at the time, presents one of the possible avenues for peace. ...read more.

Not only does war not serve to the benefit of the state concerned, better alternatives of action could be sought such as building economic relations, social interaction. Such connections can be used in persuading, as opposed to coercing, other states into behaving in the manner that is beneficial to the state concerned. Thus the argument adopted is that war is irrational, i.e. not the best-laid option, and man being irrational and susceptible to external influences, chooses to use war as a policy instrument. Andreas Osiander points out that "unlike what Carr implies, Zimmern, like Angell, was very far from seeing public opinion as necessarily a force for peace.25" Like Angell, he believes that the conflicts in the international arena, giving rise to war are resultant of intellectual, and not political failure.26 However, if Carr is to be believed, Zimmern can, in fact, be seen as being more extreme than Angell. Carr states in The Twenty Years Crisis that Zimmern is inclined towards the hypothesis that "If mankind in its international relations has signally failed to achieve the rational good, it must ... have been too stupid to understand that good." Carr's statement is not altogether justified. Although Zimmern does point out that the impediment to overcoming the obstacle towards peace is that man "are beings of conservative temper and limited intelligence27", what he implies is that man is reluctant to adjust to present realities brought by modernity. As a result of the inherent resistance towards change, man's mental capacity does not adapt to the fact that previous ways of managing international relations are no longer applicable. Consequentially, public opinion cannot be trusted to be rational. Zimmern subscribes to John Stuart Mill's argument of the "tyranny of the majority". He argues that the ruling elite, that is, the politicians in positions of power tend to be capable of rationalization. However this intellectual minority in government is consumed by the irrational public: "for statesmen, however wise and far sighted, are limited in their policies by the public opinion and parliaments to which they are responsible.28" Angell concurs on this issue. ...read more.