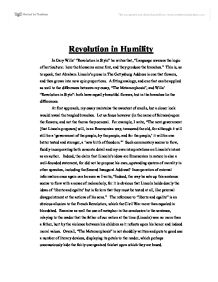 Revolution in Humility In Gary Wills' "Revolution in Style" he writes that, "Language reverses the logic of horticulture: here the blossoms come first, and they produce the branches." This is, so to speak, that Abraham Lincoln's prose in The Gettysburg Address is one that flowers, and then grows into now epic proportions. A fitting analogy, and one that can be applied as well to the differences between my essay, "The Metamorphosis", and Wills' "Revolution in Style": both have equally beautiful flowers, but in the branches lie the differences. At first approach, my essay maintains the sweetest of smells, but a closer look would reveal the tangled branches. Let us focus however (in the name of fairness) upon the flowers, and not the thorns they conceal. For example, I write, "The next government [that Lincoln proposes] will, in an Emersonian way, transcend the old, for although it will still be a 'government of the people, by the people, and for the people,' it will be one better tested and stronger, a 'new birth of freedom.'" ...read more.

was no more than a father, hurt by the violence between his children as it reflects upon his honor and indeed moral values. Overall, "The Metamorphosis" is not shoddily written and puts to good use a number of literary devices, displaying its petals to the reader, which perhaps unconsciously hide the fairly unorganized thicket upon which they are based. As we move through this literary garden we come upon a hedge which not only has the most beauteous of flowers but whose delicate infrastructure is so well organized as to appear near perfect. Turn, if you will, to Gary Wills' "Revolution in Style," a more than complete critique and exhortation of not only the Gettysburg Address but all manners of "Lincolnian prose." He writes, "His speech is economical, taut, interconnected, like the machinery he tested and developed for battle. Words were weapons, for him, even though he meant them to be weapons of peace in the midst of war." ...read more.

It becomes clear at about this point in the essay just how carefully Wills has trimmed and looked after his hedge, and is obvious, blindingly so, that nowhere is there to be found a more complete, better organized or simply more enjoyable to read literary analysis, nor could we find a more perfect piece on which to perform such an analysis. Like a surgeon, Wills has bisected, then trisected, and finally minced The Gettysburg Address (amongst other pieces of Lincolnian literature). More amazingly, Wills was able to restore these once complete pieces to their original state, the only difference being that we have given an entirely new perspective on what is Lincoln and the literary revolution which he began. The sheer ability shown by Wills outweighs the pithy attempt at analysis so clear in "The Metamorphosis," and thus, I hand to Wills my resignation from the field of writing, for never before has such an awe-inspiring display of talent declared war upon my eyes. ...read more.