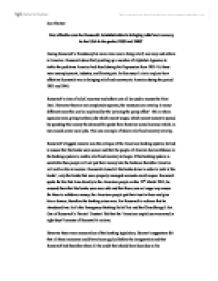 How effective was the Roosevelt Administration in bringing relief and recovery to the USA in the period 1933 and 1945? During Roosevelt's Presidency his main aims was to bring relief, recovery and reform to America. Roosevelt done this by setting up a number of Alphabet Agencies to tackle the problems America had faced during the Depression from 1933-35, these were unemployment, industry, and farming etc. In this essay I aim to explore how effective Roosevelt was in bringing relief and recovery to America during the period 1933 and 1945. Roosevelt's aims of relief, recovery and reform can all be used to access the New Deal. However they are not completely separate; the measures can overlap in many different areas this can be explained by the 'priming the pump effect' this is where agencies were giving workers jobs which meant wages, which meant money to spend, by spending this money the demand for goods from factories would increase which, in turn would create more jobs. This one example of where relief and recovery overlap. Roosevelt's biggest concern was the collapse of the American banking system; he had to ensure that the banks were secure and that the people of America had confidence in the banking system to enable relief and recovery to begin; if the banking system is unreliable then people will not put their money into the banks so therefore America will not be able to recover. Roosevelt closed all the banks down in order to look at the books', only the banks that were properly managed accounts could reopen. ...read more.

However there are some criticisms for the unemployment agencies for example the CCC which did not really give any lasting jobs to the young men and the CWA did not have any lasing value for the economy. However unemployment was only one problem that Roosevelt faced during his Presidency, Roosevelt also needed to tackle the problems in the industry, however there is a cross over with some of the agencies set up for the unemployed which in turn help to get the industry going again; schemes like the PWA for example helped get the industry going again as well as tackling unemployment. The demand for good dropped massively after 1929 so therefore employers had to cut their production and sack many of its workers; which led to unemployment rising. Industrial recovery was a priority for the New Deal, for Roosevelt to achieve this he would need the support of businessmen; however some businessmen still supported the laissez-faire policies In 1933 the National Recovery Administration was set up, its aim was to improve the relationships between the employers and workers. All employers and firms were encouraged to agree to these codes such as production limits, wage levels, working hours, prices and trade union rights. For these codes to work Congress passed laws which introduced a minimum working week, established a minimum wage, abolished child labour and gave workers the right to organise trade unions and take part in collective bargaining. The success of the NRA could be because it had such an enthusiastic leader; Hugh Samuel Johnson. The NRA was voluntary but those that joined the NRA could place the NRA blue eagle symbol in their factories and on their packaging. ...read more.

However these cutbacks led to what become known as the 'Roosevelt Recession'. As a consequence unemployment rose during the years of 1937-38; the same problem that had occurred earlier in the decade had returned in full force. For example in the manufacturing industries employment fell by 23% and the production of the motor car and such items fell by nearly 50%. Recovery seemed as far away as ever. In an attempt to end the recession Roosevelt asked Congress to vote him a $3.8billion relief budget with most of it going to the PWA and WPA. However this was a slow process and in 1939 unemployment still stood at 9million. Nearing the end on the 1930's the European war began to dominate Roosevelt's policies. War contracts and the opening of markets unable to be met by those at war brought about recovery. It is nearly unquestionable that the involvement in the Second World War rather than the New Deal brought prosperity back to the USA. In conclusion the effectiveness of the New Deal can be assessed in many different ways. Among many historians the view is clear that the New Deal only brought about partial recovery. It could be said that the agencies set up by Roosevelt had not been thought out properly to tackle the problems America faced. However the New Deal brought about the idea that the government had responsibilities to look after the welfare of its citizens, it gave workers right and brought about social security payments did contribute to the recovery of America. However it was not until 1941 that full prosperity returned, only as a result of America's involvement in the Second World War. Word Cound:2,750 ?? ?? ?? ?? Zoe Thaxter ...read more.