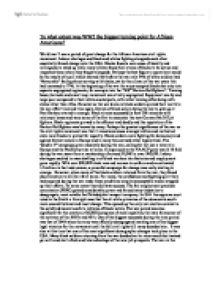 To what extent was WW2 the biggest turning point for African Americans? World war 2 was a period of great change for the African American civil rights movement. Labour shortages and black and whites fighting alongside each other essentially forced change onto the USA. Blacks found a new sense of identity and willingness to stand up while many whites found their views of blacks to be untrue and respected those whom they fought alongside. Perhaps the best figure to quote here would be the results of a poll which showed that before the war only 34% of white soldiers had "favourable" feeling about serving with blacks, yet by the climax of the war years this had increased to 77%. At the beginning of the war the army accepted blacks but only into separate segregated regiments, for example into the "369th Harlem Hellfighters". Training bases, barracks and even troop movement was strictly segregated. Equipment was by and large poor compared to their white counterparts, with initial training often being with sticks rather than rifles. However as the war drew on black soldiers proved their worth to the war effort time and time again. Stories of black sailors being the last to give up at Pear Harbour started to emerge. Black airmen successfully flew 200 missions with minimum losses and were some of the first to encounter the new German Me 262 jet fighters. ...read more.

Arguably a very significant "turning point" must be the original civil rights act of 1866 and the 12th, 13th and 14th amendments which freed blacks from slavery and at least in theory gave them their freedom. Many blacks also entered politics for the first time with the 2000 odd "carpet baggers" elected to local positions. If it wasn't for these changes a black civil rights movement wouldn't have even existed as blacks would still have been a sub class of American society deprived of all civil rights. Yet in reality little did change and much of the newly passed legislation was easily undone by the Jim Crowe laws and the like. Share cropping replaced slavery on an almost like for like basis and the grandfather clause eliminated any real possibility of voting rights for blacks. Despite the fact conditions were barely better after reconstruction it was still a turning point in the sense that it signalled the beginning of the civil rights movements as the black community now had a starting position to work from. Contrasted to the 2nd world war we can see that it almost had the opposite effect. The post reconstruction era had massive legal change yet little social advancement compared to the "social epiphany" of the war but which saw minimal legal ground being made. At the turn of the century and into the 1910's and 1920's the movement saw advancement similar to that of the war, perhaps its precursor. ...read more.

This was typified in 1991 by the brutal treatment of Rodney King, an African American who after being caught speeding was repeatedly beaten by state police officers. To some extent this showed that an underlying feeling of racial tension still existed in America, and even to this day is still evident. In conclusion we can see that WW2 was certainly not the most successful period for the civil rights movement as that mantle can probably be taken up by the events of the 1960's but it did mark a momentous turning point in the social acceptance of African Americans and even though by matter of convenience forced integration of blacks into the everyday life of America. It turned the movement in the right direction it needed to go in order for the events of the 1960's to take place. However, my personal feeling is actually that the most significant turning point overall was the Reconstruction period of 1965 to 1877. This period was by no means a massive success in reality as we have learnt that little actually changed, but if it was not for slaves being granted their freedom after the end of the civil war then none of the following advancements could even have been possible. It was this somewhat rather unassuming nudge than ignited the eventual movement that would bring about the practical changes of racial equality in the USA. ...read more.