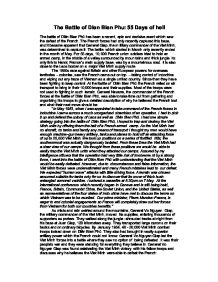 The Battle of Dien Bien Phu

The Battle of Dien Bien Phu: 55 Days of h**l The battle of Di�n Bien Ph� has been a recent, epic and decisive event which saw the defeat of the French. The French forces had only recently captured this base, and it became apparent that General Giap, the military commander of the Viet Minh, was determined to capture it. The battle which started in March only recently ended in the month of May. For 55 days, 10,000 French union soldiers tried to hold an armed camp, in the middle of a valley surrounded by mountains and thick jungle. Its only link to Hanoi, France's main supply base, was by a mountainous road. It is also close to the Laos border on a major Viet Minh supply route. The 1850s race against Britain and other European powers for overseas territories - colonies, saw the French came out on top - taking control of Indochina and wiping out any trace of Vietnam as a single unified country. Since then they have been fighting to keep control. At the Battle of Di�n Bien Ph� the French relied on air transport to bring in their 10,000 troops and their supplies. Most of the troops were not used to fighting in such terrain. General Navarre, the commander of the French forces at the Battle of Di�n Bien Ph�, was able to take time out from gathering and organizing his troops to give a detailed description of why he believed the French lost and what ...read more.

We believed that in the French camp, French general staff and the military chiefs were well informed. They'd weighed up the pros and cons, and according to their forecasts, Di�n Bien Ph� was impregnable. It has to be said that at the beginning of the autumn of '53, for example, when our political headquarters were planning our autumn and winter campaigns, there was no mention of Di�n Bien Ph�. Why? Because, the Navarre plan didn't mention it either. They had a whole series of manoeuvres planned. For us, the problem was that Navarre wanted to retain the initiative whereas we wanted to seize it. There is a contradiction that exists in a war of aggression whereby you have to disperse your forces to occupy a territory but rally your mobile forces for offensive action. We took advantage of this contradiction and forced Navarre to disperse his forces. That's how it all started. We ordered our troops to advance in a number of directions, directions of key importance to the enemy although their presence wasn't significant. So the enemy had no choice but to disperse their troops. We sent divisions north, northwest, toward the centre, towards Laos; other divisions went in other directions. So to safeguard Laos and the northwest, Navarre had to parachute troops into Di�n Bien Ph�, and that's what happened at Di�n Bien Ph�. Before then, no one had heard of Di�n Bien Ph�. ...read more.

The Battle of Di�n Bien Ph� was more than just a battle. These three people's perspectives give us a clear idea of what this battle meant to each of the individuals, why they won or lost and where they see themselves headed next. For the French a loss of face was caused by their underestimation of the intelligence of the Viet Minh, the determination of the Viet Minh soldiers and the importance of what Vietnam was fighting for. They saw however the need for intervention in Vietnam and were fighting for what they believed were their best interests as well as Vietnams. The Viet Minh forces went in as a nation, they were fighting their people's war and we are able to see this from Vo Nguyen Giap's and the Vietnamese soldier's opinions. Vietnam has had an ongoing battle with foreign powers wanting to form colonization's and gain control in Indochina. Since the 1870s Vietnam has been controlled by foreign powers and has fought to regain its independence and reunification. The Battle of Di�n Bien Ph� was 55 days of h**l and will likely see the French withdrawal but the war is not completely over yet. Jaydene Meadows The information used to compile this article was gathered from the following resources: Book/s Title: Vietnam and the Indochina conflict Author: John Wood Publisher: Macmillan Publishers New Zealand Limited Publication Date: 1990 Internet sites http://en.wikipedia.org/wiki/Battle_of_Dien_Bien_Phu - Visited 27.06.06 http://www.cnn.com/SPECIALS/cold.war/episodes/11/interviews/giap - Visited 27.06.06 http://www.pbs.org/wgbh/peoplescentury/episodes/guerillawars/giaptranscript.html - Visited 29.06.06 ...read more.