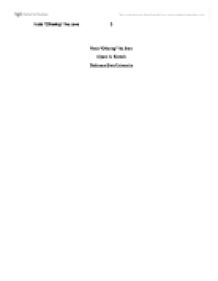 Nazis "Othering" the Jews Alyson A. Kovash Dickinson State University Abstract This paper examines the n**i's harsh treatment towards the Jews. The Nazis treated the Jews unfairly by limiting many of their rights, destroying many of their belongings, and murdering them. This event was known as the Holocaust. The Holocaust was a big event in history still remembered today by many people. It was the massive killing of many innocent Jews. The Jews were burned, starved, and gassed to death in extermination and death camps. This paper first discusses how the Holocaust got started and who started it, along with the German's belief in society and how it affected their treatment towards other groups. Then, the paper discusses the harsh treatment the Jews received from the Nazis and how the harsh treatment affected the lives of millions of Jews. Finally, this paper not only discusses how the Holocaust affected many Jews during the Holocaust, but it also describes how it is still affecting the surviving Jews today. Every major event carries the potential of a new way of looking at the past and implications of the future. r****m, slavery, terrorism, and other tragic events facing the world show man's inhumanity to man. ...read more.

Due to the racial theories created by the Nazis toward the Jews, the Germans who were the strongest and fittest were destined to rule, while the weak Jews were destined to die. As Hitler came to the theory that the Jews were useless, he started to restrict their rights. Hitler began to restrict the Jews with legislation and terror, which entailed burning books written by Jews, removing Jews from their professions and public schools, confiscating their business and property, and excluding them from public events (The Holocaust). The last of the Jews rights were excluded on September 15, 1935, when Hitler enforced the Nuremberg Laws, which stripped Jews of their citizenship and excluded them from German society (History of the Holocaust). The harsh treatment of the Jews didn't end there. In fact, violent attacks on the Jews only started to begin. In November 1938, the attack against Jews changed into the physical destruction of synagogues and Jewish owned stores, the arrest of Jewish men, the destruction of homes, and the murder of Jewish individuals (History of the Holocaust). This centrally organized riot became known as Kristallnacht (the "Night of Broken Glass"). Soon after, in 1940, many Jews were forced from their homes to live in ghettos, isolated from the rest of society (The Holocaust). ...read more.

A pervasive, depressive mood, along with angry outbursts, feelings of helplessness, and lack of security, continued to live with the Jewish survivors after the liberation (Williams). Not only did survivors suffer mentally, but they also suffered physically. Many diseases and defective conditions had slowly developed that nobody expected. According to Williams, the symptoms most frequently described were increased fatigability, failing memory, an inability to concentrate, restlessness, and headaches. Anxiety and mood disorders were also other aspects of the syndrome found in many of the investigated survivors. Often it is said that the passage of time helps ease the pain and can diminish the extent of the grief over loss of relatives and community. But it can also be said that time creates perspective and thus accentuates the historic significance of these events. Almost fifty years have passed and what has been learned? Decent people not only had shied away from expressions of anti-Semitism but also r****m in general. Today, r****m still remains in some parts of the world; however, it is not as prevalent as it once was. Because the Holocaust was so brutal and undeserving, it will be forever remembered. As Elie Wiesel once stated, "Wherever men and women are persecuted because of their race, religion, or political views, that place must - at that moment - become the center of the universe" (Quotes by Elie Wiesel). ?? ?? ?? ?? Nazis "Othering" the Jews 3 ...read more.