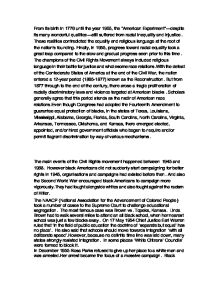 The main events of the Civil Rights movement happened between 1945 and 1968. However black Americans did not suddenly start campaigning for better rights in 1945, organisations and campaigns had existed before then.

From its birth in 1776 until the year 1955, the "American Experiment"-despite its many wonderful qualities-still suffered from racial inequality and injustice. These realities contradicted the equality and religious language at the root of the nation's founding. Finally, in 1955, progress toward racial equality took a great leap compared to the slow and gradual progress seen prior to this time. The champions of the Civil Rights Movement always included religious language in their battle for justice and wholesome race relations.With the defeat of the Confederate States of America at the end of the Civil War, the nation entered a 12-year period (1865-1877) known as the Reconstruction. But from 1877 through to the end of the century, there arose a tragic proliferation of racially discriminatory laws and violence targeted at American blacks. Scholars generally agree that this period stands as the nadir of American race relations.Even though Congress had adopted the Fourteenth Amendment to guarantee equal protection of blacks, in the states of Texas, Louisiana, Mississippi, Alabama, Georgia, Florida, South Carolina, North Carolina, Virginia, Arkansas, Tennessee, Oklahoma, and Kansas, there emerged elected, appointed, and/or hired government officials who began to require and/or permit flagrant discrimination by way of various mechanisms. ...read more.

The Montgomery protest inspired others to take action.Throughout the late 1950s and early 1960s civil rights groups organised marches, demonstrations, boycotts, sit-ins and freedom rides. All of these were done using non - violent methods.The sit-ins were started by the student civil rights movement. (The SNCC - Student Non-violent Coordinating Committee) They sat at whites only lunch counters waiting to be served. When they were arrested, another group of multi-racial students were waiting to take their place. The students trained themselves to resist the taunts of white racists who would shout at them and abuse them. The freedom riders were mostly organised by CORE (Congress of Racial Equality) .They protested against the segregation of long distance buses.They would board a bus in one state and travel to another, refusing to abide by the racial segregation rules of the bus companies.Freedom riders were often met with violence when the buses stopped.Martin Luther King and the SCLC ( Southern Christian Leadership Conference) ...read more.

This was particularly true of younger, more radical activists.And these young radicals argued that non-violence was not necessarily the best tactic and that is was not assertive enough.Some also argued that integration was not necessarily a good thing and that black people should support separatism.But these views were promoted by the Black Muslim group the Nation of Islam and most famously by Malcolm X. Malcolm X felt that non-violence simply encouraged white r****m. Malcolm X was assassinated in 1965. Even more militant were the Black Panthers.They were an armed group who wanted to force white people to grant equal right.And from the mid 1960s the civil rights movement began to split. In 1968 Martin Luther King was assassinated and this provoked more riots and the civil rights movement found it difficult to carry on in an effective way after Martin Luther King's death and Vietnam became a more dominant issue for protest movements. And Stokely Carmichael was a student leader who became a leader of what was called the Black Power movement. He said that blacks should take control of all aspects of their lives. ...read more.