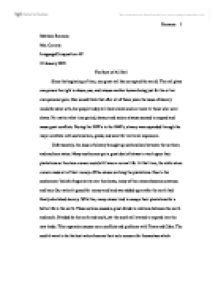 The Root of All Evil

Matthew Emmons Mrs. Cerrone Language/Composition AP 13 January 2005 The Root of All Evil Since the beginning of time, one great evil has corrupted the world. The evil gives one person the right to abuse, use, and misuse another human being just for his or her own personal gain. One would think that after all of these years the issue of slavery would be done with, but people today still have slaves and are r****t to those who were slaves. No matter what time period, slavery and r****m always seemed to expand and cause great conflicts. During the 1830's to the 1860's, slavery was expanded through the major conflicts with sectionalism, greed, and want for territorial expansion. Unfortunately, the issue of slavery brought up sectionalism between the northern and southern states. ...read more.

This expansion causes more conflicts and problems with Texas and Cuba. The south's want to be the best nation became their solo concern for themselves which brought the nation into the Civil War. Through sectionalism, the south became more independent and gluttonous. The south had a great amount of need and greed which came through the evils of slavery. Southern planters got more slaves to make more money and cause more problems on their farming plantations. With an increase in greed for money and profit, it increased slavery and the cruelty that came with it. Also, money and slaves increased thanks to Eli Whitney's cotton gin. Mr. Whitney's gin made it so one slave can do the work of four slaves. ...read more.

Manifest destiny is and idea saying we should take the land of others so we can help "better" them and spread our democracy. All the nation really did was steal the Mexicans' lands and enslave the people living there as well. Our greed also led to the treaty of Guadalupe Hidalgo helping the nation purchase all of the remaining lands from Mexico. Our greed for land and for our own personal gain brought about slavery and the expansion of it. Our greed caused the Civil War and the horrible events that came from it. Expansion of slavery destroyed the union of our nation and broke up the human relations between different races. Slavery will live to haunt us the rest of our lives. Thanks to the lazy, greedy, needy, white slave owners, slavery is still here today and is felt through sectionalism and r****m. 1 Emmons ...read more.