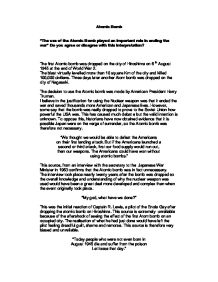 &quot;The use of the Atomic Bomb played an important role in ending the war&quot; Do you agree or disagree with this interpretation?

Atomic Bomb "The use of the Atomic Bomb played an important role in ending the war" Do you agree or disagree with this interpretation? The first Atomic bomb was dropped on the city of Hiroshima on 6th August 1945 at the end of World War 2. The blast virtually levelled more than 10 square Km of the city and killed 100,000 civilians. Three days later another Atom bomb was dropped on the city of Nagasaki. The decision to use the Atomic bomb was made by American President Harry Truman. I believe in the justification for using the Nuclear weapon was that it ended the war and saved thousands more American and Japanese lives. However, some say that the bomb was really dropped to prove to the Soviet Union how powerful the USA was. This has caused much debate but the valid intention is unknown. ...read more.

This source is extremely unreliable because of the aftershock of seeing the effect of the first Atom bomb on an occupied city. The realisation of what he had just done would have left the pilot feeling dreadful guilt, shame and remorse. This source is therefore very biased and unreliable. "Today people who were not even born in August 1945 die and suffer from the poison Let loose that day." This source is entirely reliable as evidence of the effect of the atomic bomb, however it shows no understanding whatsoever to why the weapon was used against Japan and so this source, like many others is of no use. Despite the unpleasant after effects of the Atomic bomb, I believe it was necessary to end an appalling war. It is clear from the many legitimate sources that if not for the Atomic bomb Japan would not have surrendered, whatever the price. ...read more.

"The burning of Tokyo probably killed more people and in a more frightening way, than the two atom bombs." The Atomic Bomb was not as devastatingly appalling as it is presently made out to be. As the above source indicates, there have been much worse events than this particular Nuclear weapon caused in history. The Atomic bomb was effective and ended the war. It almost certainly saved millions of American and Japanese lives and it prevented the brewing conflict between America and Russia. It is astonishingly difficult to make a clear judgement on whether the bomb was essential to ending the war. There are many convincing documents that could divert fixed opinions and challenge many historians on what they believe. I judge that opinion will always be divided on this subject as there is never enough evidence for a clear image to be formed. There are too many unreliable sources for anyone to make a final decision on the matter, but the Atomic bomb was successful in what it was aimed to do, ending World War two. ...read more.