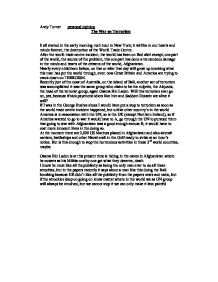 The War on Terrorism

Andy Turner personal righting The War on Terrorism It all started in the early morning rush hour in New York; it will be in our hearts and minds forever, the destruction of the World Trade Centre. After the world trade centre incident, the world has been on Red alert except, one part of the world, the source of the problem, this one part has done a tremendous damage in the minds and hearts of the citizens of the world, Afghanistan. ...read more.

Will this terrorism ever go on, yes, because if sick psychotic idiots like him and Saddam Hussein are alive it will? If I was in the George Bushes shoes I would have put a stop to terrorism as soon as the world trade centre incident happened, but unlike other country's in the world America is in association with the UN, so is the UK (except Northern Ireland), so if America wanted to go to war it would have to A, go through the UN to pursued them that going to war with Afghanistan was a good enough excuse B, it would have to cost more innocent lives in the doing so. ...read more.

Osama Bin Laden is at this present time is hiding in the caves in Afghanistan where he cowers as his Militia one by one get what they deserve, death. I know he must like all the publicity as being the only man ever to do all these atrocities, but in the papers recently it says about a man like this doing the Bali bombing because HE didn't like all the publicity from the papers news and radio, but if the atrocities keep on going on know matter where in the world we as UN group will always be involved, but we cannot stop it we can only make it less painful ...read more.