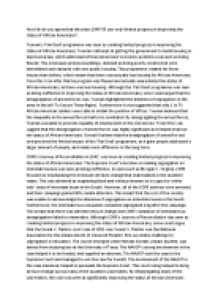 How far do you agree that the years 1945-55 saw only limited progress in improving the status of African Americans?

Painter court case of 1950 was. Sweat V. Painter was the National Association for the Advancement of Coloured Peoples? first successful challenge to segregation in education. The course emerged when Hemam Sweatt, a black student, was denied from studying law at the University of Texas. The NAACP?s strong involvement in the case helped it to be funded, and supplied an attorney. The NAACP took the case to the Supreme Court and managed to win the case for Sweatt. The involvement of the NAACP in the case massively helped to persuade the Supreme Court. This court ruling helped to bring de hure change across many of the southern universities. By desegregating many of the universities, the case was seen as significantly improving the status of African Americans. Overall I believe that the success of the Sweatt V. Painter ruling overpowered the little change that emerged from CORE?s Journey of Reconciliation. I believe this as it enabled black Americans to enlist in universities; which were previously stated as being ?white only?, whereas black Americans were still able to ride interstate buses. ...read more.