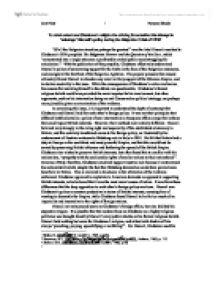 To what extent was Gladstone's religion the driving force behind his attempt to 'sabotage' Disraeli's policy during the Bulgarian Crisis of 1876?

To what extent was Gladstone's religion the driving force behind his attempt to 'sabotage' Disraeli's policy during the Bulgarian Crisis of 1876? 'Of all the Bulgarian atrocities perhaps the greatest'1 was the label Disraeli ascribed to Gladstone's 1876 pamphlet The Bulgarian Horrors and the Question of the East, which 'concentrated into a single utterance a profoundly excited public mood struggling for articulation'.2 With the publication of this pamphlet, Gladstone effectively undermined Disraeli's policy of unwavering support for the Turks in the face of the Bulgarian massacres, and emerged at the forefront of the Bulgarian Agitation. The popular pressure that ensued ultimately forced Disraeli to abandon any overt military support of the Ottoman Empire, and to declare neutrality in the issue. While the consequences of Gladstone's action are known, his reasons for involving himself in the debate are questionable. Gladstone's fervent religious beliefs could have provided the main impetus for his involvement, but other arguments, such as his intervention being an anti-Conservative political strategy, are perhaps more plausible given an examination of the evidence. In examining this issue, it is important to understand the depth of contempt that Gladstone and Disraeli held for each other's foreign policy. It was not their principles that differed: both believed in a policy of non-intervention in European affairs except for in those that could impact British interests. However, their methods were entirely different. Disraeli believed very strongly in the ruling right and superiority of the established aristocracy in Britain, and this certainly transferred across to his foreign policy, as illustrated by his endorsement of Austrian aristocratic Habsburg rule in Italy in 1851. He felt that Britain had a duty to Europe as the wealthiest and most powerful Empire, and that this would best be served by preserving British influence and furthering the spread of the British Empire. Gladstone also wished to preserve British interests, but often found this to conflict with his nationalism, 'sympathy with the unalienable rights of smaller nations to their nationhood'3. ...read more.

the balance of power within Europe required Russia to be contained, not encouraged to expand into the Balkans supposedly in order to protect the inhabitants. It is possible then that Gladstone intervened for the same reason as the Russians gave: in order to protect the Christians from an alien nation with an alien religion that mistreated them. A sample from his pamphlet gives a clear indication of his attitude towards the Turks - 'Their Zaptiehs and their Mudirs, their Bimbashis and their Yuzbashis, their Kaimakams and their Pashas, one and all, bag and baggage, shall I hope clear out from the province they have desolated and profaned'11. While this has r****t overtones, it is difficult to determine whether this is due to a difference in religion. Jenkins raises the possibility that Gladstone could have felt sympathetic towards the Christians, but quashes it with the statement that 'Gladstone was stronger on the rhetoric of indignation than on detailed knowledge of what was happening in the Balkans'12, never having visited the area or displayed any previous interest in it. Indeed, on the subject of previous massacres of Christians, Gladstone had remained suspiciously quiet, despite episodes like the massacre of the Maronite Christians in 1860 which left between 7,000 and 11,000 dead. It seems unlikely that a wild desire to protect those of the same religion only appeared during this particular occurrence, particularly as Gladstone failed to intervene when the news of the massacres initially broke, waiting another two months to bring himself into the limelight. Although Feuchtwanger claims that Gladstone's 'life in politics was a constant quest for God'13, the historian's emphasis on Gladstone as a singularly moral, religious politician is overly simplistic, and does not take into account Gladstone's practical, political nature. There is an obvious practical angle for Gladstone's participation in the Bulgarian Agitation: propping up a declining Ottoman Empire was not a viable long term policy for Britain. ...read more.