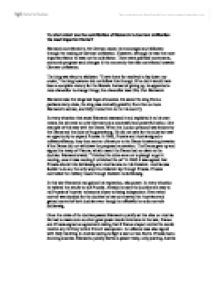 To what extent was the contribution of Bismarck to German unification the most important factor?

To what extent was the contribution of Bismarck to German unification the most important factor? Bismarck contributed to the German cause; he encouraged and followed through the making of German unification. However, although he was the most important factor he was not the only factor. There were political movements, economic progress sand changes in the monarchy that also contributed towards German unification. The king was about to abdicate: "I have there for resolved to lay down my crown," the king however did not follow this through. If he did it would have been a complete victory for the liberals. Instead of giving up, he appointed a new chancellor to change things; the chancellor was Otto Von Bismarck. Bismarck was the kings last hope of success. He saved the king from a parliamentary crisis, the king was eternally grateful, from then on took Bismarck's advice, and fully trusted him to run his country In every situation that arose Bismarck assessed it and exploited it to his own means-his aim was to unite Germany as a successful and powerful nation. One example of this was with the Danes. ...read more.

This was appropriately leaked to the French press. After this event relations between France and Prussia deteriorated. Austria took the Prussians side, again they also had the Italians support. The French had no powerful allies. The final straw went when Bismarck nominated Leopold to take over the Spanish throne; he sent a �50,000 bribe to persuade them. As soon as the French heard about this they sent an ultimatum to the king, the king chose to withdraw Leopold. Later the king was asked to never renew this proposal, he refused and sent Bismarck a telegram informing him of the recent events. Bismarck saw this as an opportunity to begin the war; he shrewdly edited the telegram and leaked it to the press. France declared war on 19 July. The French were easily beaten, they withdrew to metz. They refused the peace treaty because it meant giving up alscace and Lorraine, they fought on. Later a peace treaty was signed at Frankfurt on 10 May. Alsace and Lorraine, �200,000,000 and fortresses were taken away. As well as a humiliating march led by the king through Prussia. ...read more.

The people were united because they all wanted one thing. They fought and received a parliament; this would make them believe they had power- give them a sense of nationalism although the parliament had failed in uniting Germany they had still taken a step forward. The parliament had assessed the situation, found the problem thought of a solution and followed it through. It was only that the king did not want Germany united that the event never took place. This was another link in the chain to unification of Germany. In 1858 King Frederick William was declared insane. His brother was appointed king in 1861; he was King William I. William believed in unification of Germany and he believed Prussia should lead it. This was an essential step in the unification of Prussia. In the process of unification, things were all in motion- changing, new movements happening frequently. This was the century of change in every way. Bismarck was the most important factor contributing to the unification of Germany. He created opportunities and used every situation to its full potential. Without Bismarck the process would have taken a far longer time. However Bismarck was not the only factor the were political and economic movements but Bismarck outweighed these by his lateral think and use of his power. ...read more.