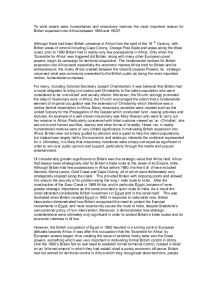 To what extent were humanitarian and missionary motives the most important reason for British expansion into Africa between 1868 and 1902?

To what extent were humanitarian and missionary motives the most important reason for British expansion into Africa between 1868 and 1902? Although there had been British presence in Africa from the start of the 19th Century, with British areas of control including Cape Colony, Orange Free State and areas along the West coast, prior to 1880 Britain had in reality very few possessions in Africa. Only when the 'Scramble for Africa' was triggered did Britain, along with many other European great powers, begin its campaign for territorial acquisition. The fundamental motives for British expansion into Africa were essentially the economic interest Africa held for Britain and its entrepreneurs, the rivalry Africa created between the Great European Powers, its strategic value and what was commonly presented to the British public as being the most important motive, humanitarian purposes. For many, including Colonial Secretary Joseph Chamberlain, it was believed that Britain had a moral obligation to bring civilization and Christianity to the native population who were considered to be 'uncivilized' and racially inferior. Moreover, the Church strongly promoted the idea of missionary work in Africa; the Church encouraged the notion that a fundamental element of imperial occupation was the extension of Christianity which therefore was a motive behind imperialism in Africa. Many missionary societies were created such as the United Society for the Propagation of the Gospel which conducted fund-raising activities and lectures. ...read more.

Until the 1880's Britain felt no real need to establish formal territorial control, instead it relied on an 'informal empire' in which they had established a purely economic influence. Britain had not wished for territorial control in Africa which they recognized absorbed time, people and money but rather economic exploitation at minimum cost. Yet British seizure of Egypt meant that other European nations began to show expansionist interest in the region which in turn threatened Britain's informal arrangement, particularly in West and Southern Africa. For example, Britain had an interest in Nigeria but a danger was that important trade along the River Niger would be under threat from French expansion in the area. Similar pressure came when Germany seized Togoland and the Cameroons in 1884 and the Belgians set up the Congo Free State in 1885. As a result the government granted a Royal Charter to the Niger Company, out of which eventually emerged the colony of Nigeria. It is unlikely that the government would have regarded the interests of the Niger traders very sympathetically had it not been for its determination not to allow France, Belgium and Germany from grabbing land which would threaten British trade, something which was of foremost importance to Britain and it would not allow to be compromised. The scramble in West Africa had also resulted in Berlin West Africa Conference which laid down rules for future annexation of territory. ...read more.

Britain also saw great potential for trade in East Africa; Zanzibar imported significant quantities of manufactured goods from Britain and India. It was a major trading point from which came ivory and leather goods and into which went textiles, brass and steel from Britain. Britain's primary interest was trade and economic gain. Without any economic potential in an area Britain was not interested in colonization, in contrast if a region held great economic investments, for example Egypt, Britain was quick to occupy the area despite its reluctance to extend formal control which it viewed as consuming time, people and money. In summary, Africa's economic potential was clearly the primary reason for British expansion into Africa 1868-1902. Britain was not a solely altruistic nation which became involved in the continent purely to help the people, instead it was driven by its own gains. It is true that rivalry from other great European powers was vital in turning British control in Africa from informal into solid occupation, however essentially Britain's determination not to allow other nations to grab land was to avoid threat to its trade and economic interests in a region. Moreover, Africa's strategic importance was also highly valued by Britain, yet once again its ultimate value lay in its path along the crucial route to India and therefore the protection of Britain's economic interest. ...read more.

The student has a very good understanding of the terms of the question and achieves a balanced conclusion, but the level of detail is superficial at some points. The question stipulates a consideration of a variety of viewpoints and the ...

The student has a very good understanding of the terms of the question and achieves a balanced conclusion, but the level of detail is superficial at some points. The question stipulates a consideration of a variety of viewpoints and the student has responded with that. However, there are more historical interpretations available on this topic, and if time contraints or word counts allow then the essay would improve with consideration of historians such as Schumpeter. The student is on task for the whole piece.

The student clearly understands the nature of the historical debate around Britain's intervention in Africa. An improvement they could make is naming some historians or their ideas, as this would show a greater depth. For example, instead of simply referring to the strategic value of Africa, they could mention or even quote Gallagher and Robinson, who wrote extensively on that point. In terms of evidence, the chronological understanding is excellent and they use dates effectively. The essay would benefit from further detail in some areas: for example, when referring to Gladstone's policy of non-intervention, deeper exemplification could be achieved by referring to the Midlothian Campaign or his "six principles" of foreign policy. The essay strikes a relatively good balance of evaluative style over narrative style, the latter being inappropriate for A Level standard work. Any more exemplification would probably be too much. It is also important to note that the examples - such as Cecil Rhodes - are perfectly valid but they are the usual examples for this topic. The essay would benefit from further research and more unusual examples, which would demonstrate independent and wider research. Sweeping assertions that lack evidence, such as "of foremost importance to Britain", sometimes harm the essay. The conclusion is balanced.

The student has adopted an excellent style of writing that is appropriate for the qualification. A particularly strong structural aspect is the summation of the conclusion in the introduction as it shows a clear line of argument. Use of terminology is good but the essay would benefit from words and phrases which show a developed understanding of key historical concepts, such as "causal factor" and "consequence". The paragraphing is fine. Some words such as "uncivilised" and "colonisation" are spelled with the American "z" which should not be copied unless your education system uses American English. The grammar is also very good, although the essay would read better if the student had started a new sentence before markers such as "in contrast", like in examples such as this - "Without any economic potential in an area Britain was not interested in colonization, in contrast if a region held great economic investments, for example Egypt, Britain...".