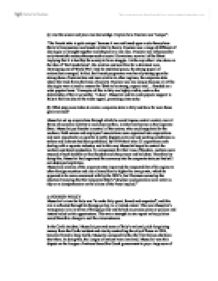 Use the source and your own knowledge. Explain how Fascism was &quot;unique&quot;.

(a) Use the source and your own knowledge. Explain how Fascism was "unique". 'The Fascist state is quite unique' because it was not based upon a sole theory how Stalin's Communism was based on Marx's theory. Fascism was a range of different of ideologies all brought together and shaped in to one idea. Fascism was influenced by early twentieth century theorys such as social Darwinism, survival of the fittest implying that it is healthy for society to have struggle. Unlike any other t also drew on the idea of 'the blonde beast', the creation and sacrifice for a dominant race. Developing out of World War I and its mutilated peace, the strong appeal of nationalism emerged. In fact, the Fascist programme was heavily strung upon the strong ideas of nationalism and more similar to other regimes, the corporate state where the trade forms the basis of society. ...read more.

By 1934 there were 22 coporations each dealing with a seperate industry, and in this way Mussolini hoped to control the workers and direct production. To compensate for their loss of freedom, workers were assured of such benefits as free Sundays and cheap tours and holidays. Therefore by doing this, Mussolini had organised the economy into the corporate state yet had still not destroyed capitalism. Mussolinis creation of the corporate state improved the respectability of his regime to other foreign countries and also allowed him to higher his own power, which he appeared to be more concerned with by the 1930's, but Thomson sumed up the situation by saying that the Corporate State's "structure and operation were never as tidy or as comprehensive as the claims of the Party implied." c) FOREIGN POLICY Mussolini's aims for Italy was "to make Italy great, feared and respected", and this aim is reflected through his foreign policy, to a limited extent. ...read more.

Mussolini had also tried to increase Italy national pride in control of city of Fiume in 1924. D'Annunzio had failed to occupt Fiume, and so, when expelled in December 1920, it remained a 'free city'. Nevertheless. This 'mutilated victory' enflamed nationalist spirit, and, Mussolini sent an Italian military officer to occupyt the towns. Mussolini finally gained Fiume in the treaty of Rome, 1924, where the Yugoslavia government finally give in to Italy, giving them complete control over this long dispouted area. This complete victory of Mussolini's was highly important in making italy 'great' as it provided evidence of its strength in getting what it wanted. Gain international respect and prestige � Locarno pact 1925 � Kellogg-Briand pact 1928 � Lateran treaty 1929 � Involvement in Stresa front early 1930's � Central role in Munich Agreement 1938 � Mussolini "an architect of peace" Develop a colonial Empire � Infiltration into Albania 1926 � Albania becomes an Italian satellite state � Invasion of Abyssinia 1935 � Total control of Albania 1939 � Expansion into North Africa � Invasion of Greece ...read more.