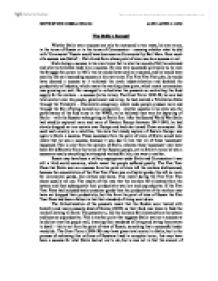 Was Stalin a Success?

Was Stalin a Success? Whether Stalin was a success can only be measured in two ways, his own terms, in the terms of Russia or in the terms of Communism - meaning whether what he did with 'Communist' Russia would have been seen as Communist by Karl Marx. How much of a success was Stalin? - If at all and from whose point of view was he a success or not. Stalin being a success in his own terms that is what he would of felt he achieved and what he believed made him a success. He was very successful politically as he won the Struggle for power in 1917, this he would have seen as a success, and he would have seen his life as a resounding success in his own terms. The First Five Year plan, he would have deemed a success as it achieved the crash industrialisation and doubled the productivity of industry, which meant the working class grew, which meant communism was growing as well. He managed to collectivise the peasants so controlling the food supply for the workers - a success (in his terms). The Great Terror 1936-38, he now had total control over his people, government and army, he had created a Totalitarian State through the Trotskyite - Zinovievite conspiracy, which made people produce more and through the fear of being named as a conspirator. ...read more.

The credit for victory over the Nazis to the Russian people, not Stalin as the Russians were motivated by a wave of Patriotism with them fighting for survival against an enemy who wanted to wipe them out. Finally Stalin can be blamed for the Cold War, which started of the arm's race, which had an enormous economic cost to Russia as they concentrated purely on keeping up with the USA. The Cold War cost the Soviet Union a third of its economic production. This meat the standard of living in Russia slipped further down making the problem of alienation and low productivity amongst the workers drop even more so. Russia's low productivity and low standard of living was caused by the constant development in the arm's race. Yet in America they had a high standard of living and high productivity and could also keep up with the Soviet Union in the arm's race. If Stalin had not got the Soviet Union involved the Cold War, then the third of all economic production that was lost to the arm's race then the standard of living would not have dropped, but they did and this is what does not make Stalin look to successful in the terms of the Russian people. The legacy of Stalin gave Russia a system of economic plans, collectivization and police state, but what he left behind was economic destruction and a standard of living that was seriously sub-standard. ...read more.

From this viewpoint it seems that Stalin was not a success at all he had just led Russia to destruction. Finally he had not kept true to the ideals of Karl Marx, he had drifted away and created inequality in Russia with the workers and peasants alienated from the system, he had created a Totalitarian State, which was enforced through fear, this meant freedom for all men was not true. Stalin's success really relies on what point of view you take when looking at it, from his he was undoubtedly success, yet from Russia's and the term's of Communism he was not a success. You could say because he went against the ideals of Communism, with him being a communist leader he was not a success because it went against everything he was supposed to be leading. Stalin succeeded politically, with his control over Russia, but he was not a success in giving equality to Russia or freedom to every man. Stalin's malevolence and the collapse of the Stalinist system in 1991 has wrecked any belief of a Communist or even a Marxist one. He succeeded in his own terms, but failed Russia and the values he was support to stand for. Between becoming a communist and getting into power he must have lost the Marxist values as he was only looking out for his own personal gain, so overall he was a failure. DEPTH STUDY: RUSSIA 1905-1941 ALEX LAYZELL 11CM ...read more.