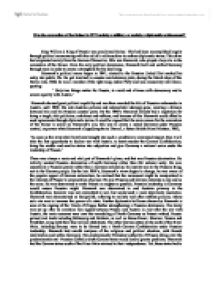 Was the coronation of the Kaiser in 1871 mainly a military or mainly a diplomatic achievement?

Was the coronation of the Kaiser in 1871 mainly a military or mainly a diplomatic achievement? King William I, King of Prussia was proclaimed Kaiser. This had been accomplished largely through political maneuvering with the aid of a military drive to enforce diplomatic terms. This drive had originated mainly from the German Chancellor, Otto von Bismarck, who played a key role in the coronation of the Kaiser. From his early political dominance, Bismarck built and unified Germany through wars in order to create a stronghold for his ideal king. Bismarck's political career began in 1847, elected to the Prussian United Diet marked his entry into public life. He got involved in counter-revolutionary plots, during the March days of the Berlin riots, 1848, he was a member of the right-wing Junker Party and was excessively anti-liberal, quoting: ' Only two things matter for Prussia, to avoid and alliance with democracy and to secure equality with Austria.' Bismarck showed great political capability and was then awarded the title of Prussian ambassador in Austria, until 1859. His anti-Austrian policies and nationalistic ideology grew, creating a division between him and his Prussian counter parts. By the 1860's Bismarck already had a reputation for being a tough, able politician, ambitious and ruthless, and because of this Bismarck could afford to seek agreements through diplomatic terms. ...read more.

Prussia gained vast lands including Schleswig and Holstein, as well as Hesse-Cassel, Hanover, Nassau and Frankfurt, along with their four million inhabitants. The other German states to the north of the River Main, including Saxony, were to be formed into a North German Confederation under Prussian leadership. Bismarck had careful analyses of the religious and political situation, with French intervention and within Germany. The predominantly Protestant authority of Prussia taking over the predominantly anti- Prussian Catholic south German states would lead to greater problems. Bismarck had the German states south of the River Main retained to their independence. Yet, these states had to sign a secret military alliance with Prussia, whereby, in the event of war, these states would not only fight alongside Prussia but allow their armies to be under the command of the King of Prussia. Prussia had become a powerful empire by the 1850's, it's economic achievements outstripping those of Austria and France. By the mid-1860's Prussia was producing more coal and steel than France or Austria, also having a more extensive railway network. This gave Prussia the military resources needed to challenge Austria nad then France. Bismarck slowly came to the realisation that diplomatic policies was not going to be the only way to achieve success, stating in 1862; ' Germany does not look to Prussian Liberalism, ...read more.

In November 1870, separate treaties were signed with each of the four southern German states by which they agreed to join the German Empire. Further political prowess shown, was the confiscation of money from the King of Hanover in 1866, was used to bribe King Ludwig II of Bavaria to agree to his terms. The Reich was a federal state; the constitution states retained their monarchies and had extensive power over internal matters. The real political power was in the hands of the Emperor, his army officers and his handpicked ministers of whom, Imperial Chancellor, Bismarck would be chief. Ludwig II agreed to put his name down to a letter asking William to accept the title of Emperor. The other princes were then persuaded and the document was sent off to William. William was finally proclaimed Kaiser or German Emperor. Bismarck's political brilliance, as proven over the Treaty of Prague, and his motives had enabled a dominating Prussian state to hold a strong position of German leadership. However, without a strong military force and without military victory, e.g. the seven weeks war, these diplomatic intentions would not have been possible, and it would not have been possible to appoint the position of Kaiser to William I of Prussia. ...read more.