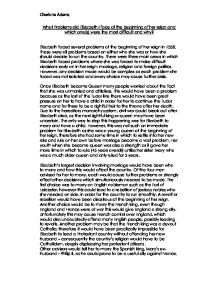 What problems did Elizabeth I face at the begining of her reign?

What Problems did Elizabeth I face at the beginning of her reign and which one(s) were the most difficult and why? Elizabeth faced several problems at the beginning of her reign in 1558. These were all problems based on either who she was or how she should decide to run the country. There were three main areas in which Elizabeth faced problems where she was forced to make difficult decisions early on in her reign: marriage, religion and foreign politics. However, any decision made would be complex as each problem she faced was not isolated and every choice may cause further crisis. Once Elizabeth became Queen many people worried about the fact that she was unmarried and childless. This would have been a problem because as the last of the Tudor line there would have been great pressure on her to have a child in order for her to continue the Tudor name and for there to be a rightful heir to the throne after her death. Due to the hereditary monarchy system, civil war could break out after Elizabeth died, as the next rightful king or queen may have been uncertain. The only way to stop this happening was for Elizabeth to marry and have a child. However, this was not such an immediate problem for Elizabeth as she was a young queen at the beginning of her reign, therefore she had some time in which to settle into her new role and rule on her own before marriage became a vast problem. ...read more.

This could be one of the most difficult problems Elizabeth faced as there was no way of her solving or changing this. However, Protestantism would not solve all her problems either as forcing everyone to be Protestant like Edward did would displease all Catholics even further. Under Edward VI Catholics refused to accept the Protestant religion entirely. When making the decision Elizabeth would need to find a solution which would cause the least amount of further problems to her as queen, such as future uprisings. She could learn from the examples and wrong decisions her family made previously such as Henry who chose to worship Catholicism but without accepting the Pope was in charge of the church. This system angered both Catholics and Protestants. Furthermore, Elizabeth would have to take into account that a decision on which religion to follow would deeply affect the future choice of who to marry, for example if she chose Protestantism it would have been almost impossible for her to marry the French king as he was a devout Catholic. Therefore this would have been a very difficult, nearly impossible decision to make as no solution would have been perfect or pleased everyone. Another area where Elizabeth faced problems at the beginning of her reign was foreign policy. Her largest issue was what to do about England being at war with France. This war was a result of Mary's marriage to Philip of Spain, which showed how carefully Elizabeth would now have to choose who to marry as it could lead to foreign conflict such as this. ...read more.

Any solution to each of these problems would deeply affect another issue. Therefore no problem Elizabeth faced at beginning of reign was isolated; they were all linked causing them to be equally difficult to overcome. However, questions over religious issues would have been the biggest decision Elizabeth would have had to make. This choice would affect everyone in England needed to be made immediately after coming into power whereas with marriage she mad much more time to decide due to her young age. Furthermore Elizabeth was at an immediate disadvantage when facing the problem of religion as Catholics saw her as a bastard and there was no way of changing this. Ultimately, if Elizabeth never married this would only cause problems after her death if she remained childless whereas religion would directly affect the country from the beginning of her reign. Choosing to marry would cause further possible religious uprisings or foreign conflict, making it easier for Elizabeth to choose to remain unmarried at first. Therefore being unmarried would have been more of a problem towards the end of Elizabeth's reign instead of at the beginning of it. The problem of foreign policy would not have been as difficult as religion as peace was fairly easily manageable, however her choice of who to ally with would also affect her choice of who to marry later. Overall, England was at a fairly stable state at the beginning of Elizabeth I's reign so the problems she faced were all fairly manageable, although they were not isolated problems so a decision to one problem would deeply affect anything else she needed to face. ?? ?? ?? ?? Charlotte Adams ...read more.