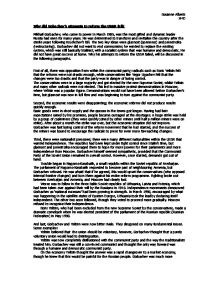 Why did Gobachev's attempts to reform the USSR fail?

Why did Gobachev's attempts to reform the USSR fail? Mikhail Gorbachev, who came to power in March 1985, was the most gifted and dynamic leader Russia had seen for many years. He was determined to transform and revitalise the country after the sterile years following Krushchev's fall. The two key ideas were glasnost (openness) and perestroika (restructuring). Gorbachev did not want to end communism; he wanted to replace the existing system, which was still basically Stalinist, with a socialist system that was humane and democratic. He did not have great success at home. Why his attempts to reform the USSR failed, will be discussed in the following paragraphs. First of all, there was opposition from within the communist party; radicals such as Boris Yeltsin felt that the reforms were not drastic enough, while conservatives like Yegor Ligachev felt that the changes were too drastic and that the party was in danger of losing control. The conservatives were in a large majority and got elected for the new Supreme Soviet, whilst Yeltsin and many other radicals were not elected. This led to massive protest demonstrations in Moscow, where Yeltsin was a popular figure. ...read more.

However, once started, demands got out of hand. Trouble began in Nagorno-Karabakh, a small republic within the Soviet republic of Azerbaijan. The parliament of Nagorno-Karabakh requested to become part of neighbouring Armenia, but Gorbachev refused. He was afraid that if he agreed, this would upset the conservatives (who opposed internal frontier changes) and turn them against his entire reform programme. Fighting broke out between Azerbaijan and Armenia, and Moscow had clearly lost. Worse was to follow in the three Baltic Soviet republics of Lithuania, Latvia and Estonia, which had been taken over against their will by the Russians in 1940. Independence movements denounced Gorbachev as 'national excesses' had been growing in strength. In March 1990, encouraged by what was happening in the satellite states of Eastern Europe, Lithuania took the lead by declaring itself independent. The other two soon followed, though they voted to proceed more gradually. Moscow refused to recognise their independence. Boris Yeltsin, who had been excluded from the new Supreme Soviet by the conservatives, made a dramatic comeback when he was elected president of the parliament of the Russian republic (Russian Federation) ...read more.

The plotters sent tanks and troops on to the streets of Moscow. This was the old Soviet way to keep control. Huge crowds gathered in Moscow; the strongly opposed this military coup. The Russian president, Boris Yeltsin, emerged as the leader of the popular opposition. Faced by this resistance, the conspirators lost faith in themselves and the coup collapsed. This last attempt by the Communist Party to save the USSR had failed. A few days later, Gorbachev returned to Moscow. He might have survived the coup, but it had not strengthened his position as Soviet leader. He had to admit that the USSR was finished and he with it. In a television speech on 25 December 1991, Gorbachev announced the end of the Soviet Union. There are four reasons why Mikhail Gorbachev's attempts to reform the USSR failed: first, there was opposition from within the communist party (the radicals vs. the conservatives). Second, the economic results were very disappointing. Third, the different republics within the USSR wanted independence, and last, there was rivalry between Gorbachev and Yeltsin. After the coup in August 1991 Gorbachev had to admit that the USSR was finished and he with it. Susanne Alberts H4D ...read more.