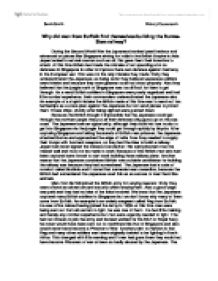 Why did men from Suffolk find themselves building the Burma-Siam railway?

Why did men from Suffolk find themselves building the Burma-Siam railway? During the Second World War the Japanese bombed pearl harbour and advanced on places like Singapore aiming for India in the British Empire in Asia. Japan lacked in natural sources such as oil; this gave them their incentive to attack. At this time Britain had made the mistake of not spending a lot on defenses in Singapore in order to improve there own defense against Germany in the European war. This was not the only mistake they made: firstly they underestimated the Japanese; as being r****t they believed Japanese soldiers were inferior and because they wore glasses could not shoot properly. Also they believed that the jungle north of Singapore was too difficult for them to get through. As a result British soldiers in Singapore were poorly organized and had little combat experience; their commanders underestimated the Japanese also. An example of a stupid mistake the British made at this time was to send out two battleships as a scare plan against the Japanese but not send planes to protect them: These ships, shortly after being sighted were gunned down. ...read more.

The Japanese had a code of conduct called Bushido and it stated that surrender was cowardice; because the British had surrendered the Japanese used this as an excuse to treat them like animals. Men from Suffolk joined the British army for varying reasons: firstly they were offered an adventure and security within employment. Also a good wage was paid and they had no idea of the risks involved. We know that the Japanese captured many British soldiers in Singapore but we don't know why many of them came from Suffolk. An example is an orderly sergeant called Reg from Suffolk. He was office trained having joined the Army in 1939- at this time men were being sent out from all sectors to fight, he was one of them. He had little training and barely any combat experience but men were urgently needed to fight. If he had not chosen to join the army and instead worked for the RAF or Royal Navy he never would have been sent out to conditions like that of Singapore and also would never have become a Prisoner of War. ...read more.

These prisoners had only one choice: work for the Japanese building the railway or be beaten and starved to death. There were many factors that contributed towards men from Suffolk becoming prisoners of war and building the railway. When looking at how it came about it is important to no place the blame/ believe it was just the British men or Japanese responsible, but instead a mixture of all factors I have mentioned. Remember, if the British had not made mistakes with their beliefs on the Singapore northern jungle then we may not have been led to surrender. Or if the Japanese had signed the Geneva Convention then men would have not been made to work on the railway. Events on both sides contributed and led to the building of the railway. Out of all the reasons I think the following is one of the most important: England made the mistake of putting their main concentration into the European war against Germany. - Therefore it was made a lot easier for the Japanese to invade Singapore with the lack of defenses the British had put up. ?? ?? ?? ?? Sarah Smith History Coursework ...read more.