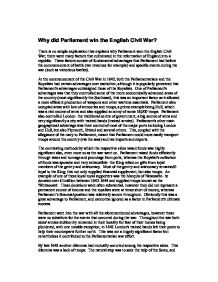 Why did Parliament win the English Civil War?

Why did Parliament win the English Civil War? There is no simple explanation that explains why Parliament won the English Civil War; there were many factors that culminated in the reformation of England into a republic. These factors consist of fundamental advantages that Parliament had before the commencement of battle (tax revenues for example) and specific events during the war (such as victorious battles). At the commencement of the Civil War in 1642, both the Parliamentarians and the Royalists had certain advantages over eachother, although it is popularly perceived that Parliament's advantages outweighed those of the Royalists. One of Parliament's advantages was that they controlled some of the more economically advanced areas of the country (most significantly the Southeast), this was an important factor as it allowed a more efficient production of weapons and other wartime essentials. Parliament also occupied areas with lots of armouries and troops, a prime example being Hull, which was a rich source of arms and also supplied an army of some 16,000 troops. ...read more.

Parliament went into the war with all the aforementioned advantages, however these were no substitute for the events that occurred during the war. Throughout the war both sides' armies stubbornly remained in their locality for fear of their homes being plundered, with one notable exception; in 1643 London's trained bands left their posts to help their counterparts further north. This was not a hugely significant factor but nevertheless it contributed to the Parliamentarian war effort. By late 1643 another dilemma had mutually occurred among the respective sides. This dilemma was a lack of troops. The natural step was to seek the help of the Scots, and both sides attempted to do so. The Scots however were opposed to the King after he had, a few years earlier, attempted to implement an Arminian prayer book into Scotland, this had led to war so the Scots sided with Parliament. This signified a huge setback to the Royalists and a great achievement for Parliament. ...read more.

This battle in 1644 signalled the end of the King's northern stronghold and was therefore a significant factor in Parliament's eventual success. A yet more decisive battle came in June 1645 on the grounds of Naseby. Here came the definite realisation of the Parliamentary victory to come when, the Royalist's last main field army was beaten by Cromwell, Fairfax and their many pawns. Then came the final major battle of the English Civil War; the battle of Longport- a mere formality for the Parliamentarians, its only significance derived from the perspective of hindsight when its finality is demonstrated. This was effectively the end of the war. The aforementioned battles laid the foundations for and signalled the end of The English Civil War and Parliament's consequent escalation to sole governors of England and her lands. In conclusion, it is not possible to state one reason or event that, beyond all others, was responsible for Parliament's victorious Civil War campaign. A whole plethora of factors were responsible for Parliament's feat and it was the amalgamation of these factors that led to their victory. ...read more.

**
There are a number of factors responsible for Parliament's victory in the Civil War; Resources, Building Armies, Making Alliances, Political Struggles & Battles are the main ones. Each one deserves a paragraph explaining in what way it was a contributing factor with evidence to support the point. This answer is relatively brief - more of an overview which would lose marks due to lack of detail and supporting evidence. Examiners tend to award marks for a level of thinking and this is why it is important not to rewrite chunks of a textbook but to think, organise, select and then deploy evidence in order to persuasively argue a point. Strong focus on the question is paramount and links should be explicit not implicit. Overall, this answer has elements in it which answer the question but it is not sustained or developed. It would also benefit from better organisation and planning.