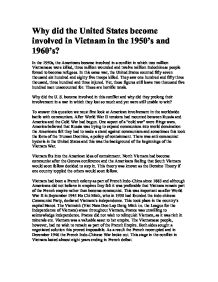 Why did the United States become involved in Vietnam in the 1950's and 1960's? In the 1950s, the Americans became involved in a conflict in which two million Vietnamese were killed, three million wounded and twelve million Indochinese people forced to become refugees. In this same war, the United States counted fifty seven thousand six hundred and eighty five troops killed. They saw one hundred and fifty three thousand, three hundred and three injured. Yet, these figures still leave two thousand five hundred men unaccounted for. These are horrific totals. Why did the U. S. become involved in this conflict and why did they prolong their involvement in a war in which they lost so much and yet were still unable to win? To answer this question we must first look at American involvement in the worldwide battle with communism. After World War II tensions had mounted between Russia and America and the Cold War had begun. One aspect of a "cold war" were fringe wars. America believed that Russia was trying to expand communism into world domination the Americans felt they had to make a stand against communism and sometimes this took the form of the Truman Doctrine, a policy of containment. There was anti communist hysteria in the United States and this was the background of the beginnings of the Vietnam War. ...read more.

In fact from 1954 until 1961 the U.S.A. had given one billion dollars to South Vietnam, most of which had been spent on the military. The United States saw they were supporting a corrupt government; but they felt the important thing was to destroy communism. Therefore, the Americans felt a corrupt government was preferable to a communist administration. Consequently, the military advisors sent to South Vietnam by the U.S. began to help with "preparation" for the elections in 1956. Diem was an unpopular leader, his government was dictatorial and corrupt, and by 1959 he was in serious trouble. He was unwilling to recognise opposition within Vietnam, he showed favouritism to Roman Catholics (Who made up only 7% of the population compared to the from coursework.info 55% of the Buddhist population) and the social and economic programs he had instigated had failed to work. All this contributed to growing unrest and alienated several important groups in the South Vietnamese society. Diem's corrupt rule had meant socialists, communists; journalists, trade unionists and religious leaders were thrown into jail. Therefore, the communists decided to resume their revolutionary war. Supported by the North, the communist guerrilla fighters the National Liberation Front, later known as the Vietcong, decided to fight against the corrupt government of South Vietnam. Ho Chi Minh the leader in North Vietnam promised to unite Vietnam again, promote land reform, promote economic reform and represent all classes and religions. ...read more.

After World War II, this was impossible the United States was now the opposite of what it was before, it was now the protector of the world. America needed other nations to trade and saw communism as a threat to this trade as well as democracy. Johnson could not back down. He did not want to be accused of being soft on communism as Truman had been, Johnson had to live up to Kennedy. Every President in office during this war did not wish to be the president that lost this war, they wanted history to be kind. In these latter stages of the war the nation's reputation as well as each individual president's reputation became ever more relevant. In conclusion, I think that it must be said that there were a number of different reasons for the United States continued involvement in Vietnam. Initially this was part of the worldwide battle against communism; however, there were other factors involved especially as the Vietnam War progressed. There are different reasons for American involvement at different stages in the conflict. World reputation and a presidents personal feeling later became very important. The U.S. did not wish it to seem that the money and men given to Vietnam in this conflict had been wasted. This war was self-perpetuating; once the U.S. forces were involved they could not pull out and appear to be wasting hundreds of men's lives and billions of dollars. It was like a mire or a slippery slope. ...read more.