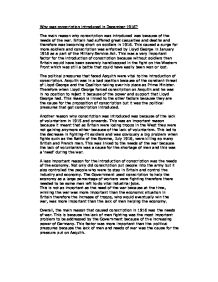 Why was conscription introduced in December 1916?

Why was conscription introduced in December 1916? The main reason why conscription was introduced was because of the needs of the war. Britain had suffered great casualties and deaths and therefore was becoming short on soldiers in 1916. This caused a surge for more soldiers and conscription was enforced by Lloyd George in January 1916 as a part of the Military Service Act. This was a very important factor for the introduction of conscription because without soldiers then Britain would have been severely handicapped in the fight on the Western Front which was still a battle that could have easily been won or lost. ...read more.