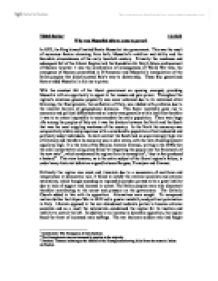 Why was Mussolini able to come to power?

Vishal Sookur 12.10.03 Why was Mussolini able to come to power? In 1922, the King himself invited Benito Mussolini into government. This was the result of numerous factors stemming from both, Mussolini's ambition and ability and the favorable circumstances of the early twentieth century. Primarily the weakness and subsequent fall of the Liberal Regime laid the foundation for Italy's future embracement of fascism however it was the combination of consequences of World War One, the emergence of fascism personified in D'Annunzio and Mussolini's manipulation of the Italian peoples that directly paved Italy's way to dictatorship. These four generalized factors aided Mussolini in his rise to power. With the eventual fall of the liberal government an opening emerged, providing Mussolini with an opportunity to appeal to the masses and gain power. Throughout the regime's existence genuine popularity was never achieved due to its restrained elitist following; the Risorgimento, the unification of Italy, was riddled with problems due to the inherent barriers of geographical divisions. This factor inevitably gave rise to economic and political differences and so loyalty was generally within localities therefore it was to an extent impossible to accommodate the entire population. ...read more.

With the war came economic collapse and a time of desperation. Due to the divisions in Italy many opposed the war further weakening the liberals' resolve and driving the system away from popularity and unification. Mussolini was able to use these weaknesses and failures as propaganda tools in order to manipulate the people thereby gaining support and attracting the masses. It reasoned that in contrast to the liberal government who were inept Mussolini and Fascism were Italy's saviors. In 1917 The Battle of Caporetto was one such humiliation; Italy faced the entire Austrian army in addition to seven divisions of German troops; 300,000 Italians were taken as prisoners of war; Mussolini used this to his advantage with effective propaganda. Again tensions and unrest increased despite the end of the war. In their interest of expansion the liberals entered the war in alliance with the entente on agreement that they receive territories on the North East frontier, namely South Tyrol, Istria and parts of Dalmatia, detailed in the Secret Treaty of London, at the defeat of Austria and Germany. Italy was denied many of these concessions, including the border town of Fiume, which had not been a relevant component of said treaty. ...read more.

triggered his assent to dictatorship through various political maneuvers which resulted in Mussolini's invitation into government with the notion that they could control him. His March on Rome in 1922 indicated his intent to seize power by force yet due to a combination of fear and support he achieved his goals legally. It seems that the weakness of the liberal regime, the consequences of the First World War and subsequent fragmentation of the Socialist Party gave rise to Fascism and Mussolini's opportunity to seize power as the powerful leader who would save Italy and then bring her greatness. 1 Introduction: The Emergence of Italy handout. 2 The Risorgimento was not necessarily popular to the majority. 3 Handout. Gramsci referring to the leaders of the Risorgimento having failed from the outset in Italian unification. 4 Voting rights were increased from 3 million to 8.5 million in 1912. 5 Handout. Italy was 'a beacon for all, a thing of beauty.' 6 Handout. 'Nothing is more remarkable than the stability of the Italian Kingdom and the building is a s safe as any in Europe.' 7 Mussolini emphasized and to an extent exaggerated a socialist threat in order to gain support. 8 Mussolini's private army, the 'squadrisimo'. ...read more.