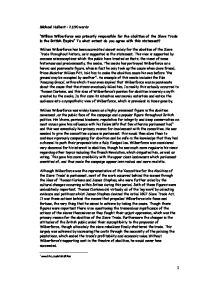 &quot;William Wilberforce was primarily responsible for the abolition of the Slave Trade in the British Empire&quot; To what extent do you agree with this statement?

Michael Hulbert - 2,690 words "William Wilberforce was primarily responsible for the abolition of the Slave Trade in the British Empire" To what extent do you agree with this statement? William Wilberforce has been accredited almost solely for the abolition of the Slave Trade throughout history, as is suggested in the statement. This view is supported by common misconceptions which the public have treated as facts, the views of some historians and predominantly, the media. The media has portrayed Wilberforce as a heroic and passionate figure, when in fact he only took up the cause when close friend, Prime Minister William Pitt, told him to make the abolition cause his own before 'the ground may be occupied by another'1. An example of this media includes the film 'Amazing Grace', within which it was even implied that Wilberforce was so passionate about the cause that the stress eventually killed him. In reality this actually occurred to Thomas Clarkson, and this idea of Wilberforce's passion for abolition is merely a myth created by the media. In this case its intention was merely entertain and entice the audience into a sympathetic view of Wilberforce, which is prevalent in times gone by. William Wilberforce was widely known as a highly prominent figure in the abolition movement, as the public face of the campaign and a popular figure throughout British politics. His 'charm, personal kindness, reputation for integrity and deep conservatism on most issues gave him influence with his fellow MPs that few others in parliament had'1 and this was essentially his primary reason for involvement with the committee. ...read more.

Clarkson capitalised on this and preached much about the conditions of the slaves, even carrying a box that contained examples of whips, chains and torture equipment to horrify listeners into signing petitions. The 'slaves' of the Northern factories backed abolition and Clarkson gathered 10,000 signatures to take to parliament. It was estimated that after 1787 he covered 35,000 miles by horseback3, an astounding achievement that was testament to his dedication. Crucially this allowed him to give the legal and political thinkers of the committee some strong evidence that proved the public's support for abolition, thus exerting pressure to pass the Slave Trade Act. Clarkson made a solid and significantly important contribution to the abolition movement though he, similarly to Wilberforce, cannot be considered the sole reason for abolition. Both Clarkson and Wilberforce were hugely interdependent; they could never have achieved emancipation of the slaves alone. Clarkson would never have been able to get his evidence or petitions into parliament were Wilberforce not in the committee, and thus slavery would have been unlikely to be questioned. Furthermore he owed much to other members of the committee for the printing of his literature and financial support as well as the public for supporting the cause through signing petitions and buying his literature. This would have resulted in both, a reduced awareness of the abolition movement due to a reduction in available literature, as well as lessening of pressure upon parliament to act on the issue of slavery, caused by a lack of support and evidence. Alone, Clarkson would have been virtually unable to spread the message against the Trade, nor affect any views within parliament and thus would have been rendered useless. ...read more.

He was merely a single piece of a much wider puzzle, which contained massive contributions from Thomas Clarkson, Cultural Changes, and Slave Rebellions. Wilberforce and Clarkson could never be singly attributed with the responsibility for abolition. They were all very interdependent and it was the sharing of their qualities that made the committee effective in raising awareness and support for abolition in Britain, yet primary responsibility could not be as confined as their campaign or attributes. Cultural changes within Britain also aided the anti-slavery cause, but once again it is not strong enough individually to be solely responsible. Without the campaigning of Clarkson and the Quakers these changes could never have been capitalised upon, and turned into support for the abolitionist cause and consequently they would have gone to waste. There is no doubt which factor is neither interdependent, nor confined. Slave rebellions shook the British and French colonies alike, which caused serious loss of life and most importantly capital. The Slave Trade was initially based upon its high profitability potential and without such an incentive there would have been no trade in the first place. It was the continuous determination of the slaves to fight for their freedom that created the need to police the trade, consequently resulting in an increase in expenditure and a decrease in profit. Without the slave rebellions it would have remained highly profitable, and with the support of the wealthy landowners within parliament it surely would never have been abolished. Undoubtedly it was for this reason that the Slave Trade was finally abolished, not for human rights, morality or justice, but due to the evaporation of the thing that was fuelling the greed; money. 1 www.bbc.co.uk/abolition 2 Pg. 123 - Adam Hochschild - Bury The Chains 3 www.wikipedia.org/wiki/Thomas_Clarkson 4 http://findarticles.com/p/articles/mi_qn4158/is_20070323/ai_n18758172 ?? ?? ?? ?? I ...read more.