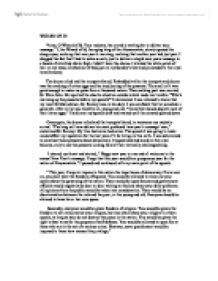 WIZARD OF ID "Arise, O Wizard of Id. Your majesty, the crowd is waiting for to deliver your message." I, the Wizard of Id, the aging king of the Akunamatata, slowly opened his sleepy eyes, woke up that new year's morning, realizing that another year had just past. I dragged the fact that I had to wake so early just to deliver a stupid new years message to a bunch of nitwitted idiots. Sigh. I didn't have the choice. I stroked the white patch of hair on my head, climbed out of bed, put on my Sunday's best and proceeded to the royal towel balcony. The drums rolled and the trumpets blared. Embedded within the trumpets and drums was the crashing of rotten eggs and the loud jeering of the peasants. ...read more.

The speech I was going to make would affect my reputation for the last years I'll be living on this earth. I was determined to convince those peasants about democracy. I tipped-toed and stood on the royal balcony, only to see the peasants looking hard at their vertically challenged king. I cleared my throat and started, " Happy new year to one and all welcome to the annual New Year's message. I hope that this year would be a prosperous year for the nation of Akunamatata." I paused and continued with my main point of the speech. " This year, I hope to impose in this nation the importance of democracy. From now on, you shall have the freedom off speech. ...read more.

The crowd were all listening intently and warmly agreeing with my message. I was delighted and paused to look at my draft. I paused and continue. "I will also be giving also citizens the right to select your own leader through a free election." However before I could finish my sentence, there was a loud cheering among the people "Yea, yea!" There was a sudden uproar in the people. A series of 'oo's and 'ah's and 'yea's were heard. "Over throw the stupid king!" shouted a voice from the back. The very next moment, hundreds of rotten eggs were being aimed and shot at the royal balcony. "Over my dead body." I continued. But it was too late. All was left of me was an old man, covered with smelly eggs. Overwhelmed by the smell of rotten eggs, I, the Wizard of Id, the aging king of the Akunamatata, slowly took his last breath and died. ...read more.