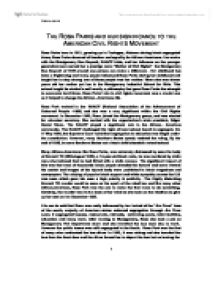 Rosa Parks and her significance to the Civil Rights movement.

THE ROSA PARKS AND HER SIGNIFICANCE TO THE AMERICAN CIVIL RIGHTS MOVEMENT Rosa Parks born in 1913, growing up in Tuskegee, Alabama during black segregated times, Rosa Parks dreamed of freedom and equality for African Americans. Her works with the Montgomery Bus Boycott, NAACP trials, and her influence on the younger generation have earned her a prestige name "Mother of Civil Rights" the Montgomery Bus Boycott of 1955 proved one person can make a difference. Her childhood has been a frightening and many people influenced Rosa Parks during her childhood and taught her to stay strong one of these people was her mother. When she was eleven years old her mother put her in the Montgomery Industrial School for Girls. This school taught its student's self-worth, a philosophy that gave Rosa Parks the strength to overcome hard times. Rosa Parks' role in civil rights movement was a crucial one as it helped to change the African-Americans life. Rosa Park worked in the NAACP (National Association of the Advancement of Coloured People -1909) and she was a very significant within the Civil Rights movement. ...read more.

However the public buses were still segregated in the South. Rosa Park was the first of many who confronted the bus driver in 1943, it was raining and she boarded the bus from the front door and the driver forced her to depart the bus but as leaving the bus she half sat in a white seat at the front. As a result diver was angry and Rosa got off the bus and was left to walk in the rain. But on 1st December 1955, Rosa Parks' secretary for the NAACP sat in the 'coloureds only' section. Coincidentally the same bus driver, who had thrown her off the bus 13 years earlier, James F. Blake, was driving the bus. As the bus got busier, a white man asked her for her seat and she refused, therefore breaking the law. She was arrested and fined $10. However, her friends organised a bus boycott until the bus company agreed to seat all passengers on a 'first come, first serve' bases. Black customers made up 75% of the Company's' business, so the boycott was very damaging. ...read more.

In November 1956, the Supreme Court ruled that busses segregation was illegal and in December, the company gave in. Black Americans had won a famous victory. Rosa Parks's refusal to give her seat helped significantly towards busses segregation becoming illegal after 381 days. Rosa Parks had the courage and bravery to take action she has been presented with numerous awards for her contribution in building positive change in a time when social inequality. Rosa had a capability for doing this effectively, but quietly and was known for her saying, "Do what is right". As Parks got older she still worked hard to make sure that she would see the day when African Americans got the rights they deserved. Parks knew the best way to keep the fight going was to inspire the younger generation and also have them join in. In February 1987 she founded the Rosa and Raymond Parks Institute for Self Development. Rosa had work really hard in the NAACP and her institute has inspired young activist. Her role in the civil right movement has been really significant as she had influenced many other African Americans to stand up for what is right. ...read more.