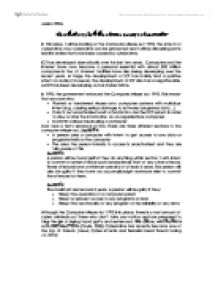 Growth of cybercrime and how_society can deal with it

The Growth of Cyber Crime and How Society Can Deal With It In this essay, I will be looking at the Computer Misuse Act 1990, the effects of cybercrime, how cybercrime can be prevented and I will be discussing some real life stories that have been caused by cybercrime. ICT has developed dramatically over the last few years. Computers and the internet have now become a personal essential with almost 800 million computers in the UK. Internet facilities have also being developing over the recent years. At large the development of ICT has mainly had a positive effect on society; however, the development of ICT also has a negative side. As ICT has been developing, so has Cyber Crime. In 1990, the government enforced the Computer Misuse Act 1990. This meant that any one who: * Planted or transferred viruses onto computers systems with malicious intent (e.g. causing serious damage to software/ programs/ data...) * Carry's out unauthorised work or hacks into another ICT system in order to view or alter the information on an organisations computers * Commits various frauds using a computer Can face a hefty sentence or fine. There are three different sections to the computer misuse act, Section 1: * A person uses a computer with intent to get access to any data or programs held on the computer * The area the person intends to access is unauthorised and they are ...read more.

Thirdly, if an e-mail is received requesting bank details, they should check that their name is at the top of the e-mail, if it isn't then this usually means the e-mail isn't legit. If the e-mail asks the person to enter their details on a website of which the link is provide, check the URL to see if it matches the official website (this can be found on Google or on any documents that have been received from the organisation), and also check that there is a padlock at the bottom left hand side of the internet page. If there is one their then it means its safe. Finally, if the person still doubts the authenticity of an e-mail, they should contact the organisation the e-mails claims to have come from to see whether or not it is genuine. Over recent years, the amount of people who use social network has increased dramatically. The most popular of them all is Facebook which has an estimated 500 million user's world wide. However, not everyone who uses it is who they say they are. As a member of Facebook myself I am aware that it clearly states you must be 16 or over to become a member, however, it is clear that there is a huge number of children under the age of 16 using Facebook. This makes Facebook an ideal place for paedophiles to find their next victims. ...read more.

This means they have the potential to get their bank details, change their bank details, get utility bills... One woman; Victoria Sennitt, from South West London had provided a lot of personal information on her profile such as her phone number, home town, e-mail... An identity thief then got hold of these details and set up a mobile phone contract using Victoria's details. It was only when Victoria received a letter in the post about a new mobile contract; under her name and containing all her personal details that she realised what had happened. Although this is less severe case of identity theft when compared to some cases, a highly experienced identity thief could easily of got Victoria's bank details... using the information the had listed on her profile. (My identity was stolen on Facebook, 2007) Although this is an old story, the method behind retrieving the person details is still the same today. People should either stop using Facebook or hold back on the information they give on their profile. Doing this could potentially save them a lot of hassle and reduce the risk of having their identity stolen. Overall I believe cybercrime has a huge effect on society and that the punishments for committing cybercrime are not severe enough. Also, Cybercrime has a huge effect on society and there is still lots left to be done to try and reduce the level of cybercrime that goes on. ...read more.