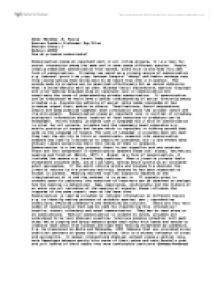 How do primates communicate?

Name: Mandeep .K. Poonia Seminar Leader: Professor Roy Ellen Seminar Group: 5 Module: SE302 How do primates communicate? Communication plays an important part in all living animals, it is a tool for social interaction among the same and in some cases different species. People usually associate communication with sounds, since this is the most utilised form of communication. Primates use sound as a primary source of communication e.g. baboons' grunt like pigs, hanuman langurs' 'whoop' and howler monkeys roar very loudly making them being able to be heard from over a kilometre. The sounds made by primates can be described effortlessly but we cannot determine what is being exactly said by them. Strange facial expressions, genital displays and urine washing displays play an important role in communication but complicate the issue of understanding primate communication. If communication can be understood we would have a better understanding of social diversity among primates e.g. discovering patterns of social ranks needs knowledge of how primates signal their status to others. Vocalisations, facial expressions, odours and body postures together show information about the primate itself and its environment. ...read more.

They can be used alone or as combinations. Tactile communication is related to touch, primates are considered to be very physical creature, juveniles grapple (wrestle) with each other while playing and group members groom each other with hands and mouths or reassure each other with touches and hugs when feeling threatened by predators. E.g. As discovered by Smuts and Watanabe, 1990 Baboons that are unrelated allow coalition partners to grasp their testicles, this is a strong indicator of trust and solidarity. In s****l interactions physical contact plays a central role, male Hamadryas baboons gently bite necks of their mates and male Bonobo's push and pull bodies of their mates into more comfortable positions (Savage-Rumbaugh et al, 1977). The duration of s****l interaction varies widely among different species, but a variable exists of interruption. Mating is quicker if a high risk of being interrupted is present. In cases of aggression reassuring contact is used and to reconcile with each other after a conflict has occurred, conflicts are very hazardous as if physical violence follows minor wounds may lead to infections to develop which may lead to death especially in the humid tropics. ...read more.

This needs to be done to find mates. Chimpanzee screams are of lower frequency than a high frequency of Bonobos this is due to the difference in size of their vocal tracts (Mitani, 1996). The ability to distinguish calls is important for defending territories and avoiding predators. When communicating the whereabouts of primates long-distance calls are used so different groups can avoid each other to who is calling and their location. E.g. Male orang-utans make long distance calls to warn away male intruders and attract oestrus females. Female and male howler monkeys calls are different , due to size of their bodies and size of the hyoid bone (amplifies long calls). E.g. Vervet monkey mothers respond more strongly to calls of distress from their own offspring, hence they can detect their relationship to the signaller, in the same way humans can recognise voices of individuals they are familiar with, (Cheney and Seyfarth, 1990). Discovering what signals mean among primates remains yet to be discovered, humans have attempted to teach monkeys to speak but have miserably failed. Scientists need to acknowledge that a different primate cannot be taught what we know due to the wide differences that exist between us. ...read more.