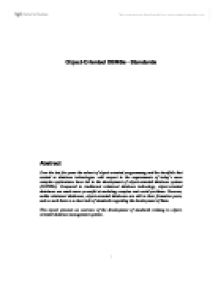 Object-Oriented DBMSs - Standards Abstract Over the last few years the advent of object-oriented programming and the shortfalls that existed in database technologies with respect to the requirements of today's more complex applications have led to the development of object-oriented database systems (OODBSs). Compared to traditional relational database technology, object-oriented databases are much more powerful at modeling complex real-world problems. However, unlike relational databases, object-oriented databases are still in their formative years, and as such there is a clear lack of standards regarding the development of them. This report presents an overview of the development of standards relating to object-oriented database management systems. Contents 1.0 Introduction 3 2.0 The Beginnings of OO 3 2.1 Database development and OO 4 3.0 Standards Groups 6 3.1 Object-Oriented Database Systems Manifesto (OODSM) 6 3.2 Object Data Management Group (ODMG) 8 3.3 Object Management Group (OMG) 9 3.4 ISO existing Standards 10 4.0 Conclusions 11 Bibliography 12 Appendix 14 Appendix 1 15 Appendix 2 16 Appendix 3 17 1.0 Introduction Relational database systems came about in the late 1960's and at the time they were considered a great improvement over previous database models. There were, and still are mostly used in traditional business systems such as stock and banking for storing large amounts of data. Today relational models are still considered to be a revolution in database technology and because they are so good at managing huge amounts of data are still by far the most widely used databases. During the 1980's with the emergence of much more complex applications came the realisation that the relational model showed areas of inadequacy with respect to the complex object relationships and data manipulation required by these newer applications. In comparison to the simplistic model of a relational database system, object-oriented database systems include features that allow for a user-extensible type system, and complex composite data values, thus enabling the modeling of much more complex real-life business and non-business systems. ...read more.

Yet despite the weaknesses of SQL, surely any standard is better than no standard at all. The standardization of SQL has provided an enormous benefit in allowing mainframes, servers, minicomputers, workstations, and personal computers to share data. What seems to have made SQL succeed is not just the fact that ANSI and ISO backed it, but also, the fact that the industry desperately needed a standard, and SQL was the only thing available at the time. Possible the main reason why we are left with such a mediocre standard is that the people who know better have not participated to date. This could be due to, companies not wanting to give up what they see to be a competitive advantage. Company shareholders would certainly not be willing to turn over potentially thousands of pounds of research and development to the computing community at large. The interest in OO Databases seems to be growing due to the obvious shortfalls of relational databases in that they are good for storing data and reporting on it, but weak when it comes to manipulating it or modelling complex and real world situations. There is an obvious need for something that has the best of both worlds, especially in today's world with the ever-increasing number of very large and complex real time systems such as those found in the service industry or the design support systems. The OODSM states that it is important to agree on a definition for a true object-oriented database and states what its characteristics should be in an attempt to pursue a common standard and a way forward. They list 3 main characteristics for the classification of a true object-oriented database: * Mandatory Requirements The system must have the following, to enable it to be an OO Database: Complex Objects, Object Identity, Encapsulation, Types or Classes, Inheritance, Overriding combined with late binding, Extensibility, Computational completeness, Persistence, Secondary storage management, Concurrency, Recovery and an 'ad hoc query facility. ...read more.

What can be learnt from this is that careful study of the way forward is needed when looking to implement a new object-oriented/object-relational system, especially if it has to communicate with older disparate systems. 4.0 Conclusions Whilst in the past there may have been a lack of standards in object-oriented systems it seems clear that the industry has reacted to the problem and a great deal of cooperation is going on. This could be due to the fact that no one system is capable enough of meeting the requirement of organisations especially at the larger end of the market. It also seems clear that the increasing trend for mergers of disparate systems and their integration are a matter of course and some 'common glue' is needed. This is further reinforced by the reluctance for IT decision makers to scrap working systems out of hand when they can gain the leverage they want with a standard translator or middleware interface. There is also evidence that the very credible, standards friendly open source movement is fast gaining influential clients and is able to deploy robust and stable solutions at the expense of proprietary systems. This possibly, means that it is unlikely that any one company could capture sufficient market share to become a new 'defacto' standard. The need to develop integrated systems cheaper is obvious. Common standards in OO will allow for reuse, extendibility, and therefore faster developed and implemented working applications. It can be seen from the report that achieving standards in OO is a rigorous task and each developer is only implementing their interpretation of the standard, due to a lack of an agreed data model and bench-testing procedure. There is no, one, all embracing and benchmark able standard in OO and it can be argued that continuing technological advances will mean that any standard would have to be reviewed frequently. Overall there is sufficient commonality in methods and designs across the groups for standards to be implemented and if so companies could make decisions knowing what sort of system they can use for future scalability and connectivity. ...read more.