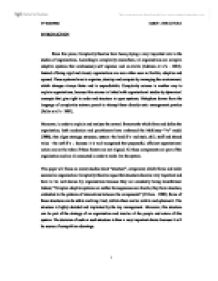 INTRODUCTION Since few years, Complexity theories have been playing a very important role in the studies of organisations. According to complexity researchers, all organisations are complex adaptive systems that continuously self organise and co-evolve (Ashmos et al's - 2002). Instead of being rigid and closed, organisations are now rather seen as flexible, adaptive and opened. These systems have to organise, develop and compete by managing the environment, which changes always faster and is unpredictable. Complexity science is another way to explain organisations, because this science is linked with organisational studies by dynamical concepts that give right to order and structure in open systems. Metaphors drawn from the language of complexity science permit to attempt these directly onto management practice (Fuller et al's - 2001). Moreover, in order to explain and analyse the several frameworks which form and define the organisation, both academics and practitioners have embraced the McKinsey "7-s" model (1980), that aligns strategy, structure, system -the hard S's- and style, skill, staff and shared value - the soft S's -, because it is well-recognised that purposeful, efficient organisational action can not be taken if these factors are not aligned. All these components are part of the organisation and are all connected in order to make live the system. This paper will focus on recent studies about "structure", component, which forms and make succeed an organisation. Complexity theories argue that structures become very important and have to be well-known by organisations because they are constantly being transformed. Indeed, "Complex adaptive systems are neither homogeneous nor chaotic; they have structure, embodied in the patterns of interactions between the components" (Cilliers - 1998). Some of these structures can be stable and long-lived, whilst others can be volatile and ephemeral. The structure is highly decided and implanted by the top management. Moreover, this structure can be part of the strategy of an organisation and involve all the people and actors of this system. ...read more.

Most recently, authors tried to define and understand the impacts of this new organisational structure. In effect, Cilliers (2000) explains that "complex organisations cannot thrive when there is too central control". Also, Adler (1999) suggests that it is important to 'attack' bureaucracy by reducing the number or size of hierarchical layers. Ashkenas et al's (2000) calls hierarchies 'vertical boundaries' which may change so that there are fewer levels of managers; and 'horizontal boundaries' which may shift so that functions are defined or departments brought together in new ways. Then, to explain the consequences of this 'post-bureaucratic' form, Barhami (1992) deals with the notion of 'flexibility' and 'responsiveness'. Moreover, 'freedom' is also considered by Sullivan (1999) to determine this structure, which permits the increase of organisational decisions in all firms and at all levels. Finally, this post bureaucratic form is used with different ways in several papers. Indeed, this structure is called flat structure (Van Der Merwe - 2002), horizontal structure (Schwarz - 2002), Team-based structure (Johnson and Scholes - 2002), or even the virtual team (Townsend - 1998; Petra Bosch Siftsema - 2002). All the papers founded argue that complex adaptive systems are now boundaryless, both internally and externally; and become 'loosely structured organisations' (Rouse - 1999, 2000). To conclude this explanation of the new structures of organisations, Sullivan (1997) suggests a definition of the emergent structure of complex adaptive systems adapted from the complexity theory. He explains that "cells can act alone to meet a particular need. However, by acting in concert, cells can perform more complex functions. Evolving characteristics, or learning, if shared across all cells, can create a higher order organism". Similarly, a cellular organisation is made up of cells (self managing, autonomous business units, etc) that can operate alone but that can interact with other cells to produce a more potent and competent business mechanism. It is the combination of independence and interdependence that allows the cellular organisational form to generate and share the know-how that produces continuous innovation. ...read more.