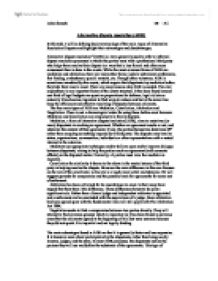 Alternative dispute resolution (ADR) In this task, I will be defining basic terminology of the main types of Alternative Resolution Disputes and highlight their advantages and disadvantages. Alternative dispute resolution" (ADR) is a term generally used to refer to informal dispute resolution processes in which the parties meet with a professional third party who helps them resolve their dispute in a way that is less formal and often more consensual than is done in the courts. While the most common forms of ADR are mediation and arbitration, there are many other forms: judicial settlement conferences, fact-finding, ombudsmen, special masters, etc. Though often voluntary, ADR is sometimes mandated by the courts, which require that disputants try mediation before they take their case to court. There are many reasons why ADR is needed. ...read more.

Mediators use appropriate techniques and/or skills to open and/or improve dialogue between disputants, aiming to help the parties reach an agreement (with concrete effects) on the disputed matter. Normally, all parties must view the mediator as impartial. Conciliation the similarity it shares to the above is the neutral stance of the third party in helping resolve the dispute. However the main difference in this area focuses on the role of the conciliator, as his role is a much more active and dynamic. He will suggest grounds for compromise and the possible basis for agreements for some sort of settlement. Arbitration has been criticized for its resemblance to court. In fact many have argued that they share little difference. Those differences however do play a significant role. Rather than a formal judge and independent arbitrator is appointed and a settlement can be concluded with the supervision of a judge. ...read more.

Most ADR processes are based on an integrative approach. They are more cooperative and less competitive than adversarial court-based methods like litigation. For this reason, ADR tends to generate less escalation and ill will between parties. In fact, participating in an ADR process will often ultimately improve, rather than worsen, the relationship between the disputing parties. This is a key advantage in situations where the parties must continue to interact after settlement is reached, such as in child custody or labour management cases. ADR does have many potential advantages, but there are also some possible drawbacks and criticisms of pursuing alternatives to court-based adjudication. Some critics have concerns about the legitimacy of ADR outcomes, charging that ADR provides "second-class justice." It is argued that people who cannot afford to go to court are those most likely to use ADR procedures. As a result, these people are less likely to truly "win" a case because of the cooperative nature of ADR ?? ?? ?? ?? Lahai Sannoh Mr - Ali ...read more.