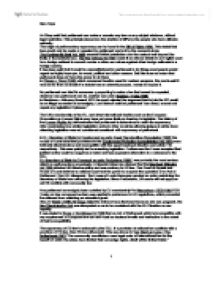 Av Dicey said that parliament can make or unmake any law on any subject whatever, without legal restriction. This principle stems from the election of MPs by the people who have ultimate authority.

Av Dicey said that parliament can make or unmake any law on any subject whatever, without legal restriction. This principle stems from the election of MPs by the people who have ultimate authority. The origin of parliamentary supremacy can be found in the Bill of Rights 1688. This stated that laws could only be made or repealed by parliament and not by the monarch alone. The Continental Shelf Act 1964 asserted British jurisdiction over the seabed well beyond the limits of the territorial sea. The War Crimes Act 1991 made it an offence triable in an English court for a foreign national to commit murder or other war crimes against other foreign nationals in a foreign country. It has been said that it would be unconstitutional for parliament to do things most people would regard as highly improper, for moral, political and other reasons. But this does not mean that parliament does not have the power to do them. In Cheney v Conn [1968] which concerned taxation used for nuclear weapons, the courts said it was not for them to decide if a statute has an unlawful purpose, merely to impose it. No parliament can bind its successor y purporting to make a law that cannot be repealed, whatever one parliament can do, another can undo: Godden v Hales 1686. ...read more.

The supremacy of EC law is enforced by the ECJ. If a provision of national law conflicts with a provision of EC law, then EC law will prevail. This was shown in Van Gend en Loos v The Netherlands 1963 "The community constitutes a new legal order of international law for the benefit of which the states have limited their sovereign rights, albeit within limited fields." The UK can withdraw from the EU. Not only can parliament legislate on any matter how it thinks fit, no parliament can bind its successor. In other words while the European Communities Act 1972 clearly implements all EU jurisprudence a future parliament can repeal the 1972 Act. Furthermore, the 1972 Act itself is not bound by its own provisions because of S.2 (4), "any enactment passed or to be passed shall be construed and have effect subject to the foregoing provisions of this section". B 1966, the UK had recognized the power of the European Court of Human Rights to hear complaints of the UK citizens and the authority of the European Court of Human Rights to adjudicate on such matters. The convention declares certain Human Rights, which are or should be protected by the state and also provides judicial procedures by which the alleged infringement of these rights may be examined at an international level. ...read more.