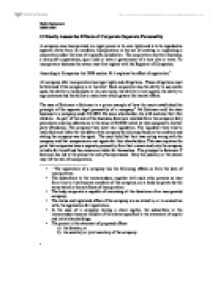 Critically Assess the Effects of Corporate Separate Personality A company once incorporated, is a legal person in its own rights and is to be regarded as separate entity from its members. Incorporation is the act of creating or organizing a corporation under the laws of a specific jurisdiction. The corporation may be a business, a non-profit organization, sport club or even a government of a new city or town. To incorporate a business the owner must first register with the Registrar of Companies. According to Companies Act 2006 section 16 it explains the effect of registration.1 All company after incorporation has legal rights and obligations. These obligations must be followed if the company is to 'survive'. Each corporation has the ability to sue and be sued, the ability to hold assets in its own name, the ability to hire agents, the ability to sign contracts and the ability to make laws which govern the internal affairs. ...read more.

The principal in Solomon V Solomon has led to the phrase the veil of incorporation. Only the judiciary or the statute may lift the veil of incorporation. Another case that distinguishes the concepts of corporate personality is Lee V Lee's Air Farming Ltd. In this Case the husband of Lee (Cathrine) formed a respondent company that carried on a business of crop spraying from the air. He was then killed while performing his duties. His wife then claimed compensation from the company as an employer of her husband. Since Mr. Lee owned 2999 of 3000 �1 shares and since he was the governing director the was an issue as to whether a relationship of employee can exist between him and the company. The court held that he was separate from the company and his wife was entitled to compensation required by the act of 1922. ...read more.

Also loss of privacy and cost of documentations is an issue of separate corporate responsible. However their is an exception to the rule of Salomon V Salomon, this is the lifting ofthe veil of incorporation. "the veil never means that the affairs of the company are completely concealed from view" (Pickering 1968 31 modern Law Review). The courts will now piece the veil of incorporation under both common law and legislation. The outcome of the case of Woolfson v Strathclyde Regional Council indicates the exception rule to Salomon V Salomon. The ruling in this case is that the veil can be pierced only when the company is a mere facade concealing the true facts. Since the Salomon case their has never been a doubt of what contributes as corporate separate governance. The case specified all the rules that is able to distinguish from its members and the company. ...read more.