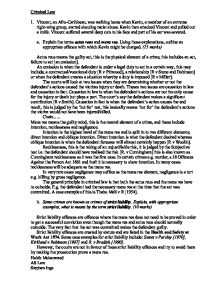 Criminal Law 1. Vincent, an Afro-Caribbean, was walking home when Kevin, a member of an extreme right-wing group, started shouting r****t abuse. Kevin then attacked Vincent and pulled out a knife. Vincent suffered several deep cuts to his face and part of his ear was severed. a. Explain the terms actus reus and mens rea. Using those explanations, outline an appropriate offence with which Kevin might be charged. (15 marks) Actus reus means the guilty act, this is the physical element of a crime, this includes an act, failure to act [an omission]. An omission is when the defendant is under a legal duty to act in a certain way, this may include, a contractual/vocational duty [R v Pittwood], a relationship [R v Stone and Dobinson] or when the defendant creates a situation whereby a duty is imposed [R v Miller]. ...read more.

Direct intention is what the defendant desired whereas oblique intention is when the defendant foresees will almost certainly happen [R v Woolin]. Recklessness, this is the taking of an unjustifiable risk, it is judged by the Subjective test i.e. the defendant should have realised the risk [R. v Cunningham] this is also known as Cunningham recklessness as it was the first case. In certain crimes e.g. murder, s.18 Offences Against the Person Act 1861 and theft it is necessary to show intention. In many cases recklessness will be adequate as the mens rea. In very rare cases negligence may suffice as the mens rea element, negligence is a tort e.g. killing by gross negligence. The general principle in criminal law is that both the actus reus and the mens rea have to coincide. ...read more.

Another argument for strict liability is that it encourages higher standards in such matters as hygiene in processing and selling food. It makes sure that businesses are run properly. One of the main arguments against strict liability is that it makes people who are not blameworthy guilty. Even those people who have taken all possible care will be found guilty and punished. This is what had happened in the case of Harrow London Borough Council v Shah [1999], they had been found guilty even though they had done their best to prevent sales of lottery tickets to anyone under the age of 16. Other arguments are it is contrary to the principle of human rights and that there is no evidence that it improves standards. ?? ?? ?? ?? Habib Mohammed AS Law Stephen Ings ...read more.