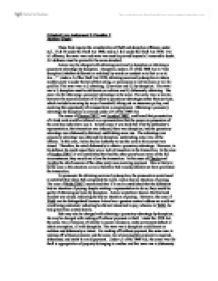 Criminal Law Assignment 2: Question 2 Abhinav Gupta These facts require the consideration of theft and deception offences, under ss.1, 15 & 16 under the Theft Act 1968, and ss.1 & 2 under the Theft Act 1978. For all offences, the actus reus and mens rea must be proved beyond all reasonable doubt. All defences must be proved to the same standard. Aslam may be charged with obtaining services by deception or obtaining a pecuniary advantage by deception. Deception, under s.15 of the 1968 Act is "any deception (whether deliberate or reckless) by words or conduct as to fact or as to law..." Under s.1 of the Theft Act 1978, obtaining services by deception is where another party is under the belief that acting, or permission to act has been or will be paid for. The actus reus is i) obtaining, ii) services and iii) by deception. The mens rea is i) ...read more.

To prosecute for obtaining services by deception, the prosecution would need to establish that when Bob completed the work, Aslam had no intention of paying. The case of Webb [2001] ascertained that if it can be established that the defendant had no intention of paying, despite making a representation to do so, they would be guilty of obtaining services by deception. Aslam would have known that his bank account was closed, indicating he had no intention of paying. However, the case of Webb can be distinguished because Aslam has a genuine contact address so could not avoid being contacted, indicating he did not intend not to pay, whereas in Webb, he had given false contact details. Bob may also be charged with obtaining a pecuniary advantage by deception. He may be charged with making off without payment or theft. Under the 1978 Act, the actus reus of evasion of liability is secure remission, make permanent default or obtain exemption, all with deception. ...read more.

It is known that Bob did not pay on the spot and he knew that that was required, as he shouted a company name to whose account the bill should be charged. He was dishonest with the company name as he gave the name of a neighbouring company, which can also prove he was intent on avoiding payment. Therefore the test is satisfied and Bob can be found guilty of making off without payment. Before the introduction of the 1978 Act, he could have been charged with theft of the petrol, but would have probably been acquitted using the case of Edwards [1976], in which it was decided that since the owner's petrol had become indistinguishable from the defendant's he could not be charged with theft of it as the actus reus could not be established. To summarise, Aslam is probably guilty of obtaining services by deception or obtaining pecuniary services by deception. It is unlikely he would be convicted for both. Bob is probably guilty of obtaining pecuniary services by deception and making off without payment, but not guilty of theft. ...read more.