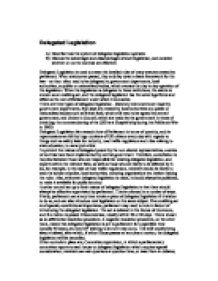 Delegated Legislation A) Describe how the system of delegated legislation operates B) Discuss the advantages and disadvantages of such legislation, and consider whether or not the controls are effective. Delegated Legislation is used to create the detailed rules of many statutes created by parliament. When statutes are passed, they only lay down a basic framework for the law - so they often need to be delegated to government departments, local authorities, or public or nationalized bodies, which oversee the day to day operation of the legislation. When the legislation is delegated to these institutions, the statute is known as an enabling act, and the delegated legislation has the same legal force and effect as the Act of Parliament under which it is enacted. There are three types of delegated legislation - Statutory instruments are made by government departments, Bye-laws are created by local authorities and public or nationalized bodies such as British Rail, which still need to be agreed by central government, and Orders in Council, which are made by the government in times of crisis (eg: the commandeering of the QE2 as a Hospital ship during the Falklands War in 1982) ...read more.