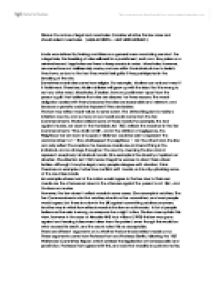 Discuss the nature of legal and moral rules , and consider whether the law does and should reflect moral rules

Discuss the nature of legal and moral rules. Consider whether the law does and should reflect moral rules. ( AQA A2 UNIT 6 - LAW AND MORALS ) A rule was defined by Twining and Miers as a general norm mandating conduct. For a legal rule, the breaking of rules will result in a punishment, such as a fine, prison or a criminal record. Legal rules are there to keep society in order. Moral rules, however, are sometimes not deliberately made, and are within the individual due to beliefs they have, or due to the fact they would feel guilty if they participated in the breaking of the rule. Sometimes moral rules come from religion. For example, Muslims can only eat meat if it Halal meat. Therefore, Muslim children will grow up with the idea that it is wrong to eat any other meat. Moral rules, if broken, have no punishment apart from the person's guilt. ...read more.

One example is the diversity of opinions on abortion. The Abortion Act 1967 made it legal for women to abort their unborn babies. Although it may be legal, many people disagree with abortion; this is therefore an example of when law conflicts with morals, as it is only upholding some of the countries morals. An example where most of the nation would agree to the law due to their own morals are the offences set down in the offences against the person's act 1861, and the laws on murder. However, the law doesn't reflect morals in some cases. One example is adultery. The Ten Commandments rule that adultery should not be committed, and most people would agree, but there is no law in the UK against committing adultery anymore. Another way in which law reflects morals is the law on euthanasia. A lot of people believe euthanasia is wrong, as everyone has a right to live. ...read more.

However, in R v Brown, some h********l sadomasochists caused injury to each other's genitals, but all had consented to this injury. This wasn't held to be acceptable, as the law on assault had been breached. Devlin would agree with this decision, as he stated that judges should still preserve common morality. Others in society would not have agreed with the actions in the case of Brown, which shows Devlins argument. From this discussion we can see that there is a diversity of morals through the UK, and the law reflects some of these morals, for example the moral of not killing is reflected with murder; but not others, for example , adultery and abortion are not crimes, but most people would see these as wrong. We can also see that there are two sides to the argument of whether law should reflect morality or whether it should be a separate thing, AND Professor Hart and Professor Devlin both have valid points. Different individuals will agree with different points of view. ...read more.