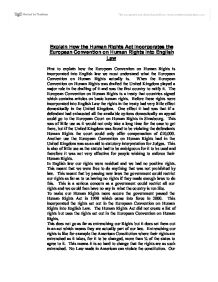 This does not go as far as entrenching our Rights but it does set them out in an act which means they are actually part of our law. Entrenching our rights is like for example the American Constitution where their rights are entrenched as it takes, for it to be changed, more than 3/4 of the states to agree to it. This means it is so hard to change that the rights are as such entrenched. No Law made in American can violate the constitution. Our rights are not entrenched because all it would take is for an Act of Parliament to wipe out the Human Rights Act and also Acts of Parliament can violate the Human Rights Act because under section 19 all a Bill needs is a statement of incompatibility in the bills 2nd reading for it to pass to become an Act (For Example the Anti Terrorism, Crime and Security Bill was in violation of Human Rights and all Parliament needed to continue with the Bill was a statement of incompatibility for it to continue, although it was rejected by the House of Lords, possibly due to the fact that it violated Human Rights). ...read more.