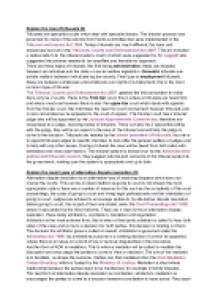 ï»¿Explain the role of tribunals (8) Tribunals are specialist courts which deal with specialist issues. The tribunal process was governed by many of the reforms from franks committee that were implemented in the Tribunal and Inquiry Act 1958. Todays tribunals are much different, the rules and procedures set out in the Tribunals, Courts and Enforcement Act 2007. This act included a radical reform to the tribunal system, much of which were suggested by Sir Leggatt who suggested the process needed to be simplified and friendlier to approach. There are three types of tribunals, the first being administrative, these are disputes between an individual and the state on social welfare legislation. Domestic tribunals are private matters between individuals eg law society. Final type is employment tribunals, these are between employees and employers over rights of employment, this is the most common type of tribunal. ...read more.

During a tribunal the case will be heard from both sides with witnesses and cross-examination. The tribunal system is looked over by the Administrative justice and tribunals council, they suggest reforms and concerns of the tribunal system to the government, making sure the system is appropriate and up to date. Explain the main types of alternative dispute resolution (8) Alternative dispute resolution is an alternative way of resolving disputes which does not involve the courts. This can be an ideal method as going to court is not always the most appropriate option, there are a number of reasons for this such as the complexity of the court proceedings, the costs of going to court and hiring legal professionals and the intimidation of going to court. Judges are advised to encourage parties to try alternative dispute resolution before going to court, this is part of their role stated under the Civil Proceedings Act 1998 where it was added by the Woolf reforms. ...read more.

The aim of the mediator is to facilitate, no shape the outcome. Parties can find mediators from the Civil Mediation Online Directory which is funded by the Ministry of Justice. Mediation is ideal where relationship between the parties need to be maintained, for example in family disputes. The next form of alternative dispute resolution is conciliation, similarly to mediation is encourages the parties to come to a decision however conciliation is more active. They push for an outcome between the parties. This is most common in industrial dispute cases where services such as ACAS, the advisory, conciliation, arbitration service, will help to resolve disputes. The final main type of alternative dispute resolution is negotiation. This is when parties try to solve the dispute on there own or through solicitors. This is less formal and can involve the exchanging of letters and emails or may consist of phone calls and meetings. ...read more.