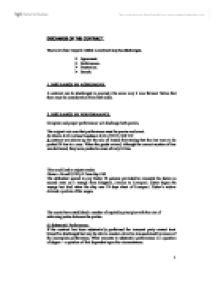 Four ways in which a contract may be discharged.

DISCHARGE OF THE CONTRACT. There are four ways in which a contract may be discharged. > Agreement. > Performance. > Frustration. > Breach. 1. DISCHARGE BY AGREEMENT. A contract can be discharged in precisely the same way it was formed. Notice that there must be consideration from both sides. 2. DISCHARGE BY PERFORMANCE. Complete and proper performance will discharge both parties. The original rule was that performance must be precise and exact. Re Moore & Co Ltd and Landauer & Co [1921] 2 KB 519. A contract was drawn up for the sale of tinned fruit stating that the tins were to be packed 30 tins to a case. When the goods arrived, although the correct number of tins was delivered, they were packed in cases of only 24 tins. This could lead to unjust results. Cutter v Powell (1795) 6 Term Rep 320. The defendant agreed to pay Cutter 30 guineas provided he executed his duties as second mate on a voyage from Kingston, Jamaica to Liverpool. Cutter began the voyage but died when the ship was 19 days short of Liverpool. Cutter's widow claimed a portion of the wages. The courts have established a number of equitable principles with the aim of achieving justice between the parties. (a) Substantial Performance. If the contract has been substantially performed the innocent party cannot treat himself as discharged but may be able to counter-claim his loss sustained by reason of the incomplete performance. What amounts to substantial performance is a question of degree - a question of fact dependent upon the circumstances. Dakin v Lee [1916] 1 KB 566. Dakin contracted to carry out certain repairs toLee's house for �1500. When Dakin requested payment on completion, the defendant refused to pay on three grounds. The underpinning of a wall was 2ft thick instead of 4ft, four inch solid columns had been used instead of 5 inch hollow ones and the joists over the bay window were not bolted as stipulated. ...read more.

The ship owner had not been told that the plaintiff intended to sell the sugar as soon as it arrived in Basrah, but he did know that there was a market for sugar at Basrah. The HL rejected the view that the test of remoteness in contract was "reasonable foreseeability" if that meant the very low degree of foreseeability required to satisfy the test of remoteness in tort. Various expressions were used to describe the degree of foreseeability required: "very substantial"; "serious possibility"; "real danger"; "liable to result". H Parsons Ltd v Uttley Ingham & Co Ltd [1978] QB 791. The CA further considered the interrelationship of the contractual and tortious tests for remoteness - though rather unsatisfactorily. Pig farmers bought a hopper for storing pig nuts. A term relating to the quality of the goods was broken by the sellers failing to open a ventilator in the hopper. This led to the nuts becoming mouldy which in turn caused the death of a large number of pigs from a rare intestinal disease that was not even known at the time. The defendant offered �18 - the cost of replacing the nuts in the hopper. The plaintiff claimed �36,000 - the value of the dead pigs, the cost of controlling the disease and the loss of profit on future sales. Denning MR thought that Hadley v Baxendale, Victoria Laundry and The Heron established a principle that could be applied only to economic loss. Where there was physical harm the tortious test should apply. Scarman LJ and Orr LJ said there was no difference in the test to be applied whether the loss was economic or physical and that the test was reasonable contemplation. However, they stated that the parties need not contemplate the precise nature of the loss, it was enough that the loss was of a type that could reasonably be supposed to have been within the contemplation of the parties as a serious possibility. ...read more.

An error in the software significantly overstated the population in the area and as a result the plaintiffs lost �1,314,846. The contract contained a clause limiting the defendant's loss to �100,000. THE UNFAIR TERMS IN CONSUMER CONTRACTS REGULATIONS 1999. These Regulations prohibit the use of unfair terms in consumer contracts that have not been individually negotiated. They prevent consumers from being bound by contractual terms which have not been individually negotiated and which are also unfair. They are narrower than UCTA 1977 (they apply only between a seller or supplier of goods and services and a consumer) but also broader in that they potentially apply to all types of contractual terms, not just exclusion clauses. There is considerable overlap between these regulations and the Unfair Contract Terms Act 1977, although the fundamental differences may be stated thus;- * The 1999 Regulations apply to all clauses - the 1977 Act only applies to exclusion and limitation clauses * The 1999 Regulations apply to contracts involving individual consumers only - the 1977 Act can apply to companies and partnerships. * The 1999 Regulations apply only to non-individually negotiated clauses - the 1977 Act can apply to all clauses, negotiated or otherwise. Reg 5 A term shall be regarded as unfair if it causes a significant imbalance in the parties' rights and obligations arising under the contract, to the detriment of the consumer. Director General of Fair Trading v First National Bank [2001] UKHL 52. This case was decided under the predecessor of these regulations. Lord Bingham stated that substantive unfairness was complimented by the requirement of good faith, which was evidenced by fair and open dealing. Openness requires that terms should be expressed fully, clearly and legibly, containing no pitfalls or traps, with prominence being given to terms which might operate disadvantageously to the consumer. Fair dealing required that the supplier should not, whether deliberately or unconsciously, take advantage of the consumer's necessity, indigence, lack of experience, unfamiliarity with the subject matter of the contract or weak bargaining position. ?? ?? ?? ?? 56 1 ...read more.