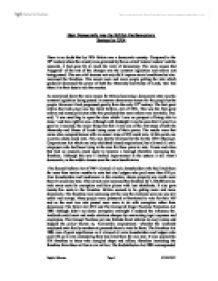 How democratic was the British parliamentary system by 1914.

How Democratic was the British Parliamentary System by 1914 There is no doubt that by 1914 Britain was a democratic country. Compared to the 19th century where the country was governed by the so-called 'natural leaders' and the monarch, it had gone far to reach the level of democracy. The main reason that 'triggered' of the rest of the changes was the constant legislation and reform acts being passed. This was vital because not only did it improve social conditions but also increased the franchise. This meant more and more people getting the vote which gradually decreased the power of both the Monarchy and House of Lords, who had taken it as their duty to rule the country. As mentioned above the main reason for Britain becoming a democratic state was the constant legislation being passed. In essence democracy means for the people by the people. However it had progressed greatly form the early 19th century. The first great reform that took place was the Great Reform Act of 1832. This was the first great reform and many politicians after this predicted that more reform was inevitable. Peel said, 'I was unwilling to open the door which I saw no prospect of being able to close,' and how right he was. Although with hindsight it can be seen that it wasn't as great as it seemed, the major thing was that it was one of the first steps of both the Monarchy and House of Lords losing some of their power. ...read more.

However after 1832 the monarch was never in full power again. The political parties become more organised and became, 'political machines' and so it was hard for the monarch to resurrect its monarchical political power. Therefore it is commonly said that to stay in some sort of power, the monarchy swapped power with popularity. During Queen Victoria's reign the prestige of the monarchy was returned, with lavish and expensive ceremonies. The public was on her side after her son was diagnosed with typhoid ten years after her husband had died from the same disease. One can argue that this sympathy was exploited and turned into positive propaganda for the monarchy. Even after Victoria's reign the monarchs weren't liked as much but still they carried out the traditions of lavish coronations. Their real political power was lost and this is clearly seen in the political crisis of 1909-1912 when the battle was between the people and the peers. In theory the monarch could have resolved the issue but instead due to the increasing franchise and the political parties power he promised to create 250 new peers if needed. The monarch had the potential to be the biggest threat to democracy but another major obstacle was the House of Lords. These hereditary leaders were not new in politics and were, one could argue the main legislative body. They were ruling on the grounds of being natural leaders and believed it was their right to be there. ...read more.

This act was a struggle for political power a sort of 'Aristocracy' versus 'Democracy' between the upper and middle classes. The Liberals could now pass more controversial legislation such as National Insurance Act without worrying about the Lords. The Lords could however delay the bill for 2 years, which was enough for a new government to be formed and it was upto the Speaker of the House of Commons to decide what bill it was, but the act established a new political atmosphere between the both houses and was a significance change in the name of democracy. Therefore in conclusion it can be seen that through new legislation and an increase in franchise Britain had become a more democratic society. The vote was available to all men and some women, which prior to the time was seen as very radical, so radical that even the chartists didn't include it in their official charter. Also the main institutions that had hindered democracy were the Monarch and Lords. They wanted to keep power in the hands of the traditionalists, however even they had to accept defeat at the 'will of the people' It was due to the increase in franchise and laws such as The Education Act, made the public more aware that subsequently led to the downfall of both institutions. Although the system wasn't completely democratic, as Women didn't have the vote and the Lords still had some power, when comparing the system to 1815 we can see that democracy had come a long way. Saghir Rehman Page 1 03/05/2007 ...read more.