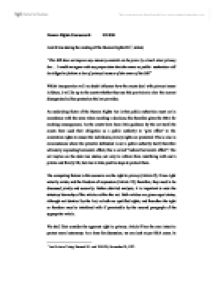 Human Rights Coursework BIL006 Lord Irvine during the reading of the Human Rights Bill1, stated; "This Bill does not impose any statutory controls on the press by a back-door privacy law... I would not agree with any proposition that the courts as public authorities will be obliged to fashion a law of privacy because of the terms of the Bill" Whilst incorporation will no doubt influence how the courts deal with privacy issues in future, it will be up to the courts whether they use this provision to alter the current disorganised ad hoc protection the law provides. An underlying factor of the Human Rights Act is that public authorities must act in accordance with the same when reaching a decision; this therefore gives the HRA far reaching consequences. As the courts have been little guidance by the act itself, the courts have used their obligation as a public authority to 'give effect' to the convention rights to ensure the individuals privacy rights are protected. This is also in circumstances where the potential defendant is not a public authority itself, therefore ultimately expanding horizontal effect; this is called "indirect horizontal effect". The act implies on the state two duties; not only to refrain from interfering with one's private and family life, but also to take positive steps to protect them. The competing factors in this scenario are the right to privacy (Article 8), if one right actually exists; and the freedom of expression (Article 10), therefore, they need to be discussed jointly and severally. ...read more.

Article 8(1) describes in what circumstances the act can be invoked to protect ones privacy. It could be argued that because the information is in possibly a public place. E.g. a hospital, then the information is already in the public arena, therefore not covered by privacy law. This argument was used by the Daily Mirror, as the Queen attempted to obtain an injunction against the paper to prevent revelations by a footman. It was argued that as Paul Burrell's book had already revealed the information, it was already in the public domain. It was also raised that Article 10 should be invoked to promote freedom of expression. In Z v Finland11, the court made an important observation. 'the protection of...medical data is fundamental importance to a persons enjoyment of his or her respect for private life". This quote was cited in Campbell, and this also raised the point of 'sensitive personal data', which attracts special protection under the Data Protection Act. So that the information, which has been surreptitiously procured, about 'Tony Blair' can be classed as private, it will need to fulfil the criterion as when protected by the law of confidence. In Douglas II, the judge commented, "to the extent that privacy consists of the inclusion only of the invited and the exclusion of all other." This quote surely includes the photographer taking pictures of Tony Blair without his permission or knowledge, as the photographer is not invited, therefore impliedly excluded. ...read more.

Butler-Sloss P stated in Venables: 'The onus of proving the case that freedom of expression must be restricted is firmly upon the applicant seeking relief. The restrictions sought must...be shown to be...justifiable as necessary to satisfy a strong and pressing social need, convincingly demonstrated, to restrain the press...and proportionate to the legitimate aim pursued' It was considered in the 'useful guidance' given by the Council of Europe Resolution 166 5 of 1998. These rights are neither absolute nor in any hierarchical order, since they are of equal value. This does not provide any satisfactory resolution, as no guidance is given to which, if any should take priority. There is a clear public interest for the need to know the state of health of Tony Blair, but an important balancing and possible outweighing factor in this situation is the surrupticious nature of the photographs. As Brooke LJ remarked, 'In the absence of any public interest the court is especially bound to pay particular regard to the PCC and a newspaper which flouts the code may have its claim to freedom of expression trumped by Article 10 (2) considerations of privacy.' Although the clear commercial cynicism of Hello's actions, the judge found that a clear breach of the PCC through the surrupticious photography was such to tip the balance against freedom of expression. As breach of confidence is only remedied by equitable principles16, therefore the judgement given must be made taking into account all circumstances, and if either party has acted bona fida, if not must bare the consequences. ...read more.