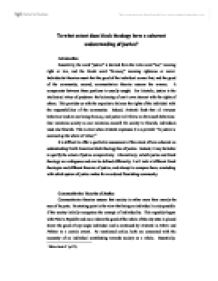 I will look at different black theologies and different theories of justice, and attempt to compare them, concluding with which system of justice makes for an ordered flourishing community. Communitarian Theories of Justice

To what extent does black theology have a coherent understanding of justice? Introduction Essentially, the word "justice" is derived from the Latin word "ius," meaning right or law, and the Greek word "???????" meaning righteous or moral. Individualist theories assert that the good of the individual comes first, and the good of the community, second; communitarian theories assume the reverse. A compromise between these positions is usually sought. For Aristotle, justice is the intellectual virtue of prudence: the balancing of one's own interest with the rights of others. This provides us with the capacity to balance the rights of the individual with the responsibilities of the community. Indeed, Aristotle finds that all virtuous behaviour leads to one being ?????????and justice will follow on from such behaviour. One maintains society as one maintains oneself; for society to flourish, individuals must also flourish. This is clear when Aristotle expresses it in a proverb: "in justice is summed up the whole of virtue,"1 It is difficult to offer a qualitative assessment of the extent of how coherent an understanding North American black theology has of justice. Instead, it may be better to qualify the extent of justice comparatively. Alternatively, as both justice and black theology are ambiguous and can be defined differently, I will look at different black theologies and different theories of justice, and attempt to compare them, concluding with which system of justice makes for an ordered flourishing community. Communitarian Theories of Justice Communitarian theories assume that society is rather more than merely the sum of its parts. Its starting point is the view that being an individual is only possible if the society initially recognises the concept of individuality. This arguably began with Plato's Republic and Laws where the good of the whole of the city-state is placed above the good of any single individual and is continued by Aristotle in Ethics and Politics to a certain extent. ...read more.

Having looked at society, he tries to unpack it in a theoretical way. This means that it is descriptive not prescriptive. Nozick defines justice in terms of "entitlement". Everyone is entitled to what they have, earn or acquire as long as it does in the way in which my society or community defines as legal. Indeed, there are three main principles at work in a just society, and these principles apply to the just distribution of all "holdings": firstly just acquisition; secondly just transfer; thirdly rectification (the resort to law if the acquisition or transfer of goods or holdings has been illegal). If all of the principles are adhered to then everyone is legally entitled to what they have got. In this way, rich weapons dealers or cigarette manufacturers are allowed, as long as the goods or holdings in which they deal are transferred and acquired legally, then the society is a just one. This is what constitutes justice. We have no moral obligations to anyone except ourselves, and provided we live by the rules of society then we are morally safe. There are many different attitudes towards black theology, but essentially it was developed not for an intellectual ruling elite but instead for tens of millions of working class blacks in the United States. It emerges from their experiences of hundreds of years of white r****m and economic exploitation, two forms of discrimination that are inseparable and which still exist in our time. In the mid 20th Century blacks rebelled against r****m and their imposed poverty during the Civil Rights movements, with radicals rallying around the slogan: Black Power! Black theology allied itself with this black power movement that was clearly calling for a new economic order. James Foreman's Black Manifesto saw clearly that liberation would not work within a capitalist system: any black man or n***o who is advocating a perpetuation of capitalism inside the United States is in fact seeking not only his ultimate destruction and death but is contributing to the continuous exploitation of black people all around the world. ...read more.

For in Cone's black view, justice is human willed, but God demonstrates justice through human agency, i.e. God siding with the poor, where there clearly is a justice of inequality. In the beginnings of black theology, while it was just emerging, the first and most evident source of oppression of blacks was white r****m. So r****m became its primary target, while black theology's support for socialism remained under the surface. However as black theology developed, writers like Cone and West recognized the value of a Marxist critique of the capitalist system, and integrated that into black theology and now call for a total liberation of black people from both r****m, capitalism, and imperialism. This is a huge step towards justice. Conclusion There are many different black theologies with different outlooks. Indeed, many self-titled black theologians criticise other self-titled theologians for not actually having a black theology. James Cone thought that Martin Luther King did not have a theology. The fact that many "black theologians" have thought that King did not actually have an academic theology meant that I felt it acceptable not to include him in this essay. Instead, I have tried to show how different black theologies have understandings of different theories of justice. Therefore I think that there is a significant understanding of justice and the ramifications of it in black theologies. Obviously by defining justice in different ways, the significance of justice in black theology can be augmented or reduced. However, I have tried to compare some of the most widely acclaimed theories of justice with well-known black theologies and my conclusion thus far has been that there is definitely a coherent sense of justice apparent in most black theologies. Katie Cannon sums up this point succinctly:12 "Black religion and black church served as a sustaining force, assuring boundless justice." Black theology emerges from black religion and the black church, and so it too tries to assure boundless justice, and does so coherently in my opinion. ...read more.