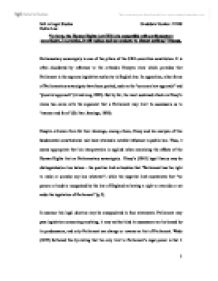 &quot;In form, the Human Rights Act (HRA) is compatible with parliamentary sovereignty. In practice, it will reduce such sovereignty to almost nothing.&quot; Discuss.

"In form, the Human Rights Act (HRA) is compatible with parliamentary sovereignty. In practice, it will reduce such sovereignty to almost nothing." Discuss. Parliamentary sovereignty is one of the pillars of the UK's unwritten constitution. It is often elucidated by reference to the orthodox Diceyan view which provides that Parliament is the supreme legislative authority in English law. In opposition, other forms of Parliamentary sovereignty have been posited, such as the "common law approach" and "pluralist approach" (Armstrong, 2003). But by far, the most sustained attack on Dicey's views has come with the argument that a Parliament may limit its successors as to "manner and form" (Sir Ivor Jennings, 1959). Despite criticism from Sir Ivor Jennings, among others, Dicey and his analysis of this fundamental constitutional rule have retained a notable influence in public law. Thus, it seems appropriate that his interpretation is applied when examining the effects of the Human Rights Act on Parliamentary sovereignty. Dicey's (1961) legal theory may be distinguished as two halves - the positive limb articulates that "Parliament has the right to make or unmake any law whatever"; while the negative limb asseverates that "no person or body is recognised by the law of England as having a right to override or set aside the legislation of Parliament" (p.3). In essence this legal doctrine may be encapsulated in four statements: Parliament may pass legislation concerning anything; it may neither bind its successors nor be bound by its predecessors; and only Parliament can change or reverse an Act of Parliament. Wade (1955) furthered this by stating that the only limit to Parliament's legal power is that it cannot detract from its own continuing sovereignty. The idea of Parliamentary supremacy is deemed to have undergone erosion from several directions, of which incorporation of the European Convention of Human Rights (ECHR) into UK domestic law is one. As a matter of international law the UK has been bound by the ECHR's terms since the 1960s (Tomkins, 2003). ...read more.

If afforded a broad meaning, section 3 could be seen as authorising domestic courts to adopt the type of interpretative techniques proposed by the ECJ in Marleasing SA v La Comercial Internacional de Alimentacion SA Case C-106/89 [1990] ECR I-4135. Notably, the phrase "so far as it is possible to do so" in section 3 is an almost verbatim echo of the ECH formula concerning the scope of domestic courts' interpretative autonomy in Marleasing (Loveland, 2003). Prior to the enactment of the HRA, the courts employed broad, unorthodox interpretative methods in order to protect human rights, as in the case of R v Secretary of State for the Home Department, ex parte Leech [1994] QB 198. So section 3 may be construed as requiring all domestic courts in all cases to use imaginative and expansive interpretative methods, for there is no reason why the courts should stop employing unorthodox interpretative methods to safeguard human rights (Loveland, 2003). Section 3 can be a radical tool, as demonstrated in the cases of R v Offen and others [2001] 2 All ER 154 and R v A [2001] 3 All ER 1. The interpretive duty and power conferred on the judiciary run counter to Dicey's (1959, p.39) assertion that "all that a court of law may do with an Act of Parliament is apply it" (Lord Bingham, 2002). Campbell (2001) saw the interpretation requirement as encouraging the courts to view legislation on the basis that Parliament intends to legislate in a manner which is compatible with the ECHR. There was considerable debate over quite what the government intended section 3 to do, and what the courts would make of it. Marshall (1998) suggested that section 3 was "a deeply mysterious provision" (p.169). Loveland (2003) concluded that the real question raised by section 3 was not whether it required courts to make a radical break from orthodox interpretative principles, but to what extent it required them to do so. ...read more.

The more expansive the courts' interpretive power, the less likely it would be that a particular statutory provision could not be reconciled with a Convention right (Loveland, 2003). What the courts have yet to do is to develop clear principles to demarcate between section 3 compatibility and section 4 incompatibility (Klug & Starmer, 2001) It is not entirely clear why section 3 was used in Offen to redefine words, but not in R v Mental Health Review Tribunal to re-reverse the burden of proof, particularly if, as Lord Steyn suggested, an express or implied contradiction is needed before the courts decide that it is not possible to interpret legislation compatibly with Convention rights (Klug, 1999). The effect of the declaration mechanism is political rather than legal, in that Parliament is invited to revisit it statute book, and if so wished, to amend or repeal legislation in light of a declaration having been granted (Tomkins, 2003). Parliament continues to have supreme legislative authority because it may legislate in contravention of Convention rights, if it wishes so. In conclusion, although there is evidence that the Act "further erodes the already thread-bare doctrine of Parliamentary sovereignty" (Greer, 1999, p.20), the HRA has left Parliament's legislative supremacy mostly intact in comparison with the European Communities Act 1972, which had a far more damaging effect. Ewing (1999) also supports the view that Parliamentary sovereignty has been preserved by the HRA: "the inevitable incorporation of the Convention has been secured in a manner which subordinates Convention rights to constitutional principle and democratic tradition" (p.91). The Human Rights Act appears to have been successfully implemented and has engendered a stronger human rights culture in the courts (Elliot & Quinn, 2005). It has achieved its desired balance by retaining Parliament's legal right to enact legislation which is incompatible with Convention rights. Of course, the HRA may be repealed, but the Act may come to acquire a 'moral entrenchment' so that repeal would become politically inconceivable, while still legally possible (Phillipson, 2003). ...read more.