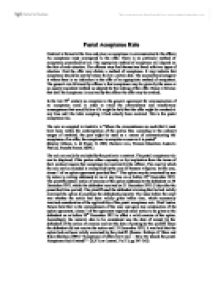 The courts were compelled to examine further policy considerations in order to determine whether the postal acceptance rule should be retained. The courts formed the view that the postal acceptance rule could be justified on the grounds of agency. It was argued that the post office was the agent of the offeror and offeree and that consequently acceptance must be viewed as complete upon delivery to the post office. The argument was that the reason is not satisfactory. "The post offices are only carriers between them. They are agents to convey the communication, not to receive it. The difference is between saying ' Tell my agent A, if you accept' and 'Send your answer to me by A.' In the former case A is to be intelligent recipient of the acceptance, in the latter he is only to convey the communication to the person making the offer which he may do by letter, knowing nothing of its contents. The post office are only agents in the latter sense. The most persuasive reason for wholly rejecting the justification based on agency has been stated by Simon Gardner, who argues that an offeror's agreement to use the post as a means of communicational acceptance "surely does not establish agency. ...read more.

Contract is formed at the moment acceptance takes place. The mistake on the part of mutual agent falls equally upon the shoulders of both and this causes inconvenience or hardship. However this can be counter argued. If an offeror choses he can always make the formation of the contract, however he proposes absolute formation of contract upon actual communication to himself of the acceptance. If the offeror does not receive any reply from the offeree he can always make inquiries to the offeree about the offer. If the contract is not concluded there would be considerable delay in transactions and the acceptor would never be safe until he has received notice that his letter of acceptance had reached its destination. (Source: Kathryn O' Shea and Kylie Skeahan (1997) "Acceptance of offers by E-mail - How Far should the postal Acceptance Rule Extend? " QUT Law Journal, Vol 13, pp 247-262). The nature of postal acceptance rule denotes a separation of parties by time and distance. If each party felt that they were not bound by their assent to contractual terms until they received confirmation of the other's receipt then the situation ' might go on ad infinitum'. Hence no contract would ever be completed by post unless a legal ruling was made on the matter. ...read more.