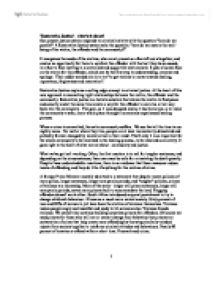 'Restorative Justice' - what's it about?

'Restorative Justice' - what's it about? Our present justice system responds to criminal activity with the question "how do we punish?" A Restorative Justice system asks the question: "how do we restore the well-being of the victim, the offender and the community?" It recognises the needs of the victims, who are at present so often left out altogether, and creates an opportunity for them to confront the offender with the hurt they have caused, in a face to face meeting in a controlled and supportive environment. It puts a human face on the victim for the offender, which can be the first step to understanding, remorse and apology. Their oddly worded aim is to try "to get victims to move towards healing, repentance, forgiveness and restoration". ...read more.

It goes right to the heart of what we are about - community and justice. What we've got isn't working. Often, the first reaction is to call for tougher sentences, and depending on the circumstances, there can even be calls for re-instating the death penalty. Despite these understandable reactions, there is no evidence that these measures reduce levels of offending, and they do little if anything for the victims of crime. A foreign Prime Minister recently admitted in a statement that despite recent policies of more police, longer sentences, longer non-parole periods, and "tougher" policies, crimes of violence are increasing. More of the same - longer still prison sentences, longer still non-parole periods, seven more prisons built to accommodate the load. Flogging offenders doesn't work either. ...read more.

It can rebuild the family relationships which have gone wrong in the first place. Offenders many a times say it is the hardest thing they have ever had to do. Restorative Justice has been enthusiastically embraced by many "Crime Stopping" bodies worldwide. In fact, so ardent is their belief that restorative justice is practical justice that they have invested lots of money for its implementation in their respective countries. But, even more important, the commitment to the process has produced the very results that are intended. Not only is the victim restored - the central issue in restorative justice - but, in many cases, the offender is reconciled back into the community. Restorative justice is a viable alternative to crime. It changes the emphasis in the justice system from the offender to the victim, from punishment to healing and proves itself not as a retrograde step but a progressive one. 1 ...read more.